CLPR conducted a day-long orientation program at St. Joseph’s College of Law on 25th July 2018 for the newly admitted first-year students. The program consisting of four sessions aimed to introduce students to the origins and implementation of India’s constitutional values and how the law could be used as a tool for social transformation.

In the first session, ‘Constitutional Origins and Purpose’, Kruthika R., began by asking the students some fundamental questions: ‘What is a Constitution? Why do we need one?’. She then took the students through critical aspects of the Indian constitution-making project and emphasized that India’s constitutional history, particularly the Constituent Assembly Debates, is invaluable to illuminate India’s present.

To illustrate how this type of historical-analytical mode of thinking was useful, she led an exercise that involved students closely reading the arguments put forward by framers of the constitution in the CADson the issue of uniform civil code and how these compared with contemporary debates around the Triple Talaq Case. A discussion followed – students expressed the insights that they gained from this exercise and evaluated various arguments that they encountered.

Satya Prasoon, in his session – ‘Working the Constitution’, picked up from where the previous session left off: ‘So we have this document called the Constitution of India, and we have an understanding of the values – equality, fraternity, liberty etc. that it encodes, so how do we ensure these ideas are actualized?’ he asked the students. Students had some interesting responses that included increasing awareness of the Constitution by translating it into all regional languages. 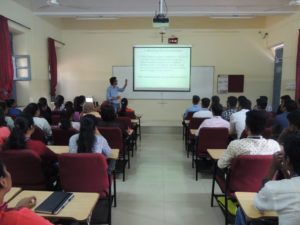 Satya took the students through the importance of various stakeholders – citizens, different organs of government, etc – and their roles in implementing the vision of the Constitution. Among these various actors and institutions, he identified the Supreme Court of India as the most critical toward and gave reasons for why this was the case; he further supplemented this point by leading the discussion around the right to privacy which was recently decided by the Supreme Court.

The primary way through which the social transformation project of the Indian Constitution is implemented is through lawmaking – mostly lead by members of the legislature. However, Brototi Dutta, in her session – ‘Citizens Right-ing the Law’, argued that citizens themselves in various ways could play a key role in the advocacy and drafting of various laws. She used the Right to Information to illustrate how grassroots social movements could lead to the enactment of social legislation and emphasised the relationship between law and social transformation. Students then were given the opportunity to give examples of social issues that they felt could be tackled through legislation; a chunk of these discussions revolved around Section 377. 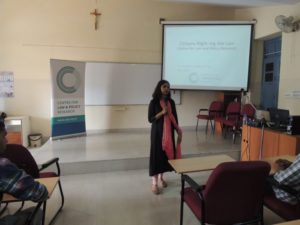 While the writing of new laws can lead to social change, Disha Chaudhary in her session – Making the Law Count’ argued that existing laws could also be used effectively. She introduced the students to social litigation as another mode of using the law to transform society. She emphasised that while big landmark cases were certainly critical, litigation around relatively smaller and local issues around issues like the maintenance of parks and lakes also had great potential to effect social change. Students then identified a range of issues where the strategic use of litigation could prove useful. 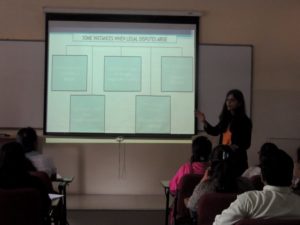 This is a guest post from our intern Prarthana Patnaik, who is currently in her 4th year at National Law University Odisha. Vineeth Krishna, Lead Associate Editor at CLPR, edited this post.