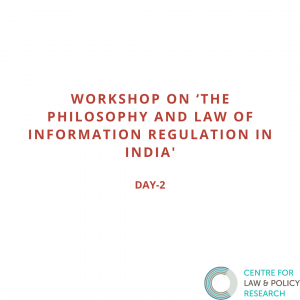 On December 11 and 12, 2020, CLPR organised a workshop on the Philosophy and Law of Information Regulation in India, which brought together scholars and practitioners across disciplines to present research and reflections on different aspects of information regulation and law in India. This blog summarises day 2 of the workshop.

The first panel for Day 2 was on the theme of Privacy and Information Regulation in India, discussed by Gurshabad Grover and Divij Joshi. The first paper discussed was Nga Than, Ameen Jauhar and Abhishek Gupta’s ‘The Privacy Conundrum: An empirical examination of barriers to privacy among Indian social media users’. In this paper, the authors’ presented their methodology and results of an empirical survey of privacy preferences and expressions by Indian social media users. Their paper attempts to ground privacy and data protection concerns in empirical work on how users choose to express online choices and how the design of social media technologies affects their preferences. The discussion of the paper critically analysed the utility and methodologies of empirical studies in examining privacy preferences.

The second paper presented in this panel was Dr Sudhir Krishnaswamy’s paper on the ‘Constitutional History of Information Regulation in India’. Krishnaswamy’s paper looks at the parallels, continuities and disjunctions between norms, institutions and systems of information in India. The paper argues that the constitutional right to ‘freedom of speech’ has gradually been inverted and recast as a broader right to information, in the sense of right to education, or the right to knowledge of public affairs.

The second panel was on the theme of Institutional Approaches to Information Regulation in India, where the respondents to the paper discussions were Srijoni Sen and Dr Rahul Singh. Smriti Parsheera, Vishal Trehan and Trishee Goyal presented their paper ‘Market structure and competition in the telecom services: Exploring the Jio effect’, where they examine how a new entrant to the telecommunications and data services market has affected the market structure of telecom in India, and how competition regulators should consider these disruptions, as well as what it means for telecom regulation going forward. The discussion of the paper centred around both examining the political the economy of competition law in information services, the practical limitations of competition regulation in India and the emergence of new normative frameworks for assessing market regulation in India.

Jayna Kothari’s paper on ‘Algorithmic Classification, Discrimination and Fairness’, looks at how ideas of constitutional non-discrimination and equality under Indian law can inform wicked problems of algorithmic fairness and biases produced by artificial intelligence and machine learning applications utilised in consequential fields like employee recruitment and evaluation. The discussion centred around how process-based regulation, as opposed to outcome-based regulation, can be a benchmark for assessing claims to equality and fairness in the applications of algorithmic classification systems, and discussed the challenges of unearthing indirect discrimination within algorithmic systems.

The final paper on the panel was Divij Joshi and Kruthika R.’s paper ‘Automated Administration: Administrative Law and Algorithmic Decision-Making in India’, which examines the use of automated decision-making systems employed within administrative agencies in India and place its impact within frameworks of administrative law. The paper argues for re-invigorating administrative law frameworks like limits on delegation and due-process claims to avoid concerns of transparency and fairness within algorithmic systems. The respondents to the paper presentation argued for historicising automated decision-making systems as emerging from particular logics of bureaucratic management, and to challenge the rationalist underpinnings of administrative uses of algorithmic technologies.