School Policies on Gender and Sexuality 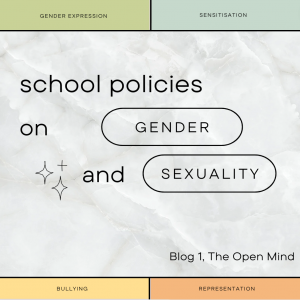 In India, queerness is a sensitive topic. The LGBTQ+ community (an abbreviation for lesbian, gay, bisexual, transgender, and queer/questioning) represents a diversity of sexuality and gender identity and includes anyone who is not heterosexual or cisgender. Representation and acceptance of the community has increased in media and advertisements. Additionally, there have been several recent legislations representing these identities, such as the decriminalisation of Section 377 (legalising same-sex relations between consenting adults) in 2018 and the The Transgender Persons (Protection of Rights) Act in 2019.

Despite the progress on paper, there are still miles to go in terms of general acceptance. In order for this to happen, representation and inclusivity needs to begin in schools. A study by UNESCO’S New Delhi office reported alarming estimates among 371 gay and transgender men and women between 18 and 22, with around half having experienced physical bullying and sexuality harassment in primary school due to their queerness. The consequences were harsh, with around 70% reporting anxiety, depression, and reduced interaction with peers.While this is a small sample size, stories of harassment due to sexuality continue to abound in India.

Part of the reason for this is the lack of education and sensitisation on the LGBTQ+ community. To get a sense of steps that a school could take, I interviewed Ms Geetika Kohli, a sociology teacher at Mallya Aditi International School in Bangalore, and her Gender Studies class, about where the school stands in terms of an LGBTQ+ policy, gender and sexuality in terms of their experiences and opinions. Policies in school should include clear penalties for homophobic behaviour, as well as bullying. Gender expression, sensitisation and spreading of information, and representation of LGBTQ+ people in syllabus and media, etc. When it comes to Mallya Aditi International School, many of these standards are met (as Ms. Geetika Kohli said, ‘they are certainly trying to be as inclusive as
possible’.

Both students and teachers agreed that homophobic bullying should be treated along the same lines as other forms of systemic bullying such as racism, sexism, colourism, etc- with strong disciplinary measures. Ms. Kohli was clear on her stance: ‘I think bullying of any sort should not be tolerated and stern action is required.’ It was also made clear the important role of sensitisation seminars and spreading awareness- they were described by a student as follows: ‘It was not only educational, but also interactive and fun. We learned a lot.’ Beyond spreading awareness and sensitising children about different identities that exist outside the societal norm, we also discussed the impact of representation, especially in the media. Representation is ‘encouraging, especially for young LGBTQ+ people who are finding their voice- it shows them that they are not alone, shows them that their identity is normal,’ a student says, ‘it certainly helps normalise such things for both young people and older ones alike.’ While recent international shows like ‘Heartstopper’ have been instrumental in showing us authentic representation, we still have a ways to go when it comes to media like Bollywood. However, in Mallya Aditi, there is certainly a lot of exposure to different identities.

In terms of gender expression, it was noted that ‘having a uniform can be beneficial, especially when representing a school.’ Ms. Kohli, adding to the point, talked about the fairly progressive uniform policies in MAIS- ‘The very fact that we have an intersex uniform shows that we aren’t trying to segregate our students based on gender.’ In terms of gender expression, especially in Grades 11 and 12, the policy adopted is quite relaxed- people can choose their hair length, wear jewellery, etc. ‘Comparatively, Aditi is quite liberal as far as these things go,’ another student stated.

When it comes to inclusivity, MAIS has taken an admirable first step in trying to bridge the gap between a cultural bias and acceptance. Schools can and should continue to improve, by implementing stronger anti-homophobia policies, sensitisation, and more. This would ideally be in the form of a written policy, in order to make their stance clear. Gender identity and sexuality is an integral part of the lives of many students, and building supportive environment where students feel safe to express themselves is essential.

This blog post was written by our intern Nayantara Narayanan, a 12th grade student of Mallya Aditi International School.