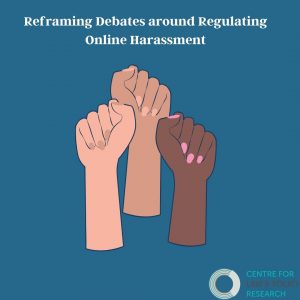 Online harassment has become remarkably routine, particularly for communities based on gender, caste, sexual orientation and other identities. Several reports, including the National Crime Records, demonstrate a sharp increase in cyber-crimes on a yearly basis. While reports indicate a need to create a framework to mitigate online harassment, there are different challenges in regulating the reported crimes.

Earlier this month, the Delhi Police closed a case filed by journalist Rana Ayyub against online harassment and threats. Another recent media report suggested that Bengaluru police refused to file an FIR on cyberstalking as it did not involve serious offences such as ‘pornography or gang rape’.

The existing legal framework offers disparate legal remedies for online harassment. The Indian Penal Code, 1860 criminalises stalking, voyeurism, intimidation and defamation. All these can be extended to online spaces as well. The Information Technology Act, 2008 criminalises publication or transmission of ‘obscene content’ or ‘sexually explicit content’. Moreover, the current framework for holding intermediaries or platforms responsible for the harassment that occurs through their channels, under Section 79 of the Information Technology Act, is entirely inappropriate. The Supreme Court of India has also attempted to redress this concern through piecemeal directions against online platforms.

First, civil rights approach takes into account the harm online harassment inflicts not only on victims but on specific communities and society at large. Second, it would have a ‘valuable normative and expressive role’ in reaffirming the ideals, including equality, that society stands for. Third, civil rights claims tend to be taken more seriously than traditional crimes. Fourth, this framework might remedy wrongs that otherwise might not have been taken into account by the traditional legal system.

It might be useful to re-imagine online harassment in India not only as traditional crime, but one that could potentially form the basis of a fundamental rights claim.