Manual Scavenging on a Rise in Tamil Nadu 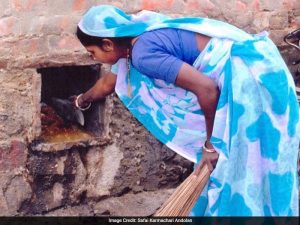 Identification of Manual Scavengers & their Rehabilitation

Upon closer examination, of the recent data released by Greater Chennai Corporation, initially, 252 manual scavengers were identified in Chennai and upon review, 82 persons have been removed from the initial list. As a result, the Corporation claims there are only 173 manual scavengers in its jurisdiction. It is pertinent to note that some of the reasons for removal seem to be defeating the very purpose of the identification exercise itself. For instance, some of the reasons for excluding were: 7 persons migrated to Andhra Pradesh, 3 persons died, 2 persons found to be residing at outside the municipality jurisdiction, 1 person is imprisoned. The purpose of the identification was to rehabilitate them and their family so that they do not engage in manual scavenging to earn a livelihood. Therefore, the removal of manual scavengers from the identified list citing the aforementioned reasons cannot justify the denial of the rehabilitation benefits that the Act guarantees.

Manual Scavengers are not Rehabilitated

As per the Central Government, Tamil Nadu holds the dubious figure of 144 manual scavengers’ death during the years 2013 to 2018. The Municipal Administration of Tamil Nadu, in an RTI reply, noted that 51 persons died while doing manual scavenging work in Tamil Nadu during the period from 2014 to 2019 (November). Out of this, 14 deaths occurred in 2019 alone.

Tamil Nadu ranked second in the country in manual scavengers death in the last five years (2016-2020) by recording 43 deaths just after Uttar Pradesh, which recorded 52 deaths. The incidences of death of manual scavengers while cleaning septic tanks takes place even in cities like Chennai and Coimbatore.

Death by manual scavenging continues to be recorded as recently as February 2021. This demonstrates that technology or machines for cleaning septic tanks/sewerage are not being implemented that could avoid manual scavenging deaths.

Therefore, to effectively implement the ban on manual scavenging, the Government has to take steps to seriously identify the manual scavengers. And provide them with not just one-time compensation but long-term rehabilitation benefits especially skill development training. This would ensure that they get alternative employment and build a more sustainable source of livelihood.