Lawyers’ Workshop on The Scheduled Castes and Scheduled Tribes (Prevention of Atrocities) Act, 1989 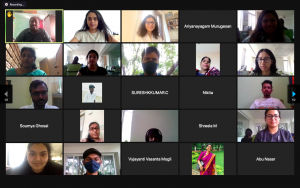 On 3rd July 2021, the Centre for Law and Policy Research conducted a workshop for lawyers from Tamil Nadu on The Scheduled Castes and Scheduled Tribes (Prevention of Atrocities) Act, 1989 (“PoA Act”), and the Rules, under this Act.

The workshop was organized in the course of our efforts to work towards better implementation of the laws around caste discrimination in India. The objective behind the workshop was to increase the engagement of lawyers with the PoA Act. Further to build the capacity of litigating lawyers from Tamil Nadu to provide better legal aid to the victims and witnesses of caste discrimination.

The workshop had two sessions: First was on the overview of the PoA Act; Second was around practical challenges to the implementation of the PoA Act. The expert speakers included: Jayna Kothari, Senior Advocate, Karnataka High Court, & Executive Director, CLPR; Pandiyan Kamal, CEO, Witness for Justice and B.S. Ajeetha, Advocate.

Session I: An overview of the Scheduled Castes and Scheduled Tribes (Prevention of Atrocities) Act, 1989 & Rules

Jayna Kothari led this session. She explained the various categories of offences under the PoA Act. And highlighted how the courts’ interpretation of some key provisions are diluting the purpose of the Act. She examined the various provisions around the prevention and monitoring of incidences of atrocities. And also elaborated on the remedies and monetary reliefs available to victims of atrocity and their dependents. Jayna also took the participants through the Scheduled Castes and Scheduled Tribes (Prevention of Atrocities) Rules, 1995. She analysed the rules around precautionary and preventive measures, prosecution of cases under the PoA Act, information to police officer in-charge of a police station, financial allowance & remedies for victims and witnesses of caste discrimination.

Session II: Challenges in the implementation of the Law

B.S.Ajeetha and I.Pandiyan Kamal led this session. Ajeetha pointed out that crime against women and children from the SC/ST community is rising at the rate of 15% per year since 2017. She noted that the actual figure is likely to be much higher because of underreporting. The inadequacy of police strength and Exclusive Special Courts is another hurdle in implementing the PoA Act, she noted.

Adding on to Ajeetha’s remarks, Pandiyan highlighted how key PoA Act provisions are not being implemented on the ground. The Police Officers are hesitant to book offences under the PoA Act. In such cases, he urged that section 4 be invoked: this prescribes punishment for public servants when they neglect their duties under the PoA Act. Further, he brought attention to the lack of Exclusive Special Courts in Tamil Nadu. Despite 27 districts being identified as atrocity prone, only seven Exclusive Special Courts are set up. This denies the right to a speedy trial. Lastly, he pointed out the inefficiencies of the District and Sub-Divisional and State Level Vigilance & Monitoring Committees. Noting that between 1995 and 2020 the State Level Vigilance and Monitoring Committee met only four times.

Several lawyers pointed out the daily realities of caste discrimination litigation in Tamil Nadu. From difficulties arising out of registering FIRs,to access to statutory reliefs and remedies, the experts provided strategies for better implementation of the PoA Act.