Freedom of the press: A Constitutional History 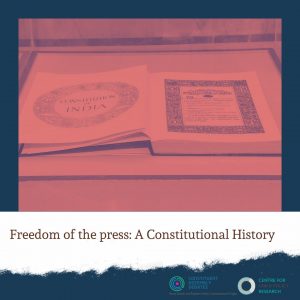 Last month the Supreme Court in Anuradha Bhasin v. Union of India dealt with the issue of continued internet shut down in Kashmir. While the Court did not direct the restoration of internet services, it recognised the internet as a mode to exercise one’s fundamental rights. The judgment also addressed the freedom of press claim: even though it was not encoded in the Constitution, the judgment reiterated the fundamental right to freedom of the press within Article 19 (1) (a). While freedom of the press is not explicitly mentioned in the Constitution of India, 1950, there were longstanding demands to make it a part of the constitutional text.

Many Historical Constitutions, which capture the constitutional imagination prior to the formal constitution making process, viewed freedom of speech as a key fundamental right. However, only a few demanded the freedom of the press as a separate right. States and Minorities (Dr B.R. Ambedkar, 1945), a book that was submitted to the Sub-Committee on Fundamental Rights in the Constituent Assembly declared: ‘No law shall be made abridging the freedom of Speech, of the Press, of Association and of Assembly except for consideration of public order and morality’. Sapru Committee Report (Sir Tej Bahadur Sapru, 1945), which was primarily set up to examine then prevailing communal questions from constitutional and political perspectives, demanded ‘the freedom of Press and association’. Constitution of Free India: A Draft (M.N. Roy, 1944), released and discussed by the Radical Democratic Party, sought ‘The freedom of press and speech is guaranteed to all but the enemies of the people’.

When the formal constitution making project kicked off, some Constituent Assembly members had similar demands. During the debates around Draft Article 13 (Article 19, Constitution of India,1950), Damodar S Seth proposed an amendment which sought to spell out “freedom of the press” along with the other freedoms. He noted while one might argue that press freedom might be implicit in freedom of speech and expression: “the present is the age of the Press and the Press is getting more and more powerful today. It seems desirable and proper, therefore, that the freedom of the Press should be mentioned separately and explicitly.”

KT Shah was another strong proponent of freedom of the press. He wanted to insert “freedom of speech and expression; of thought and worship; of press and publication”. He pointed out that several countries underwent ‘constitutional struggles’ to ensure freedom of the press. Further, he implied that freedom of the press is explicitly guaranteed where ‘liberal constitutions prevailed’. Shah insisted that leaving this out, as described by another member, was a “black Act”. He further noted:

“To omit it altogether, I repeat, and I repeat with all the earnestness that I can command, would be a great blemish which you may maintain by the force of the majority, but which you will never succeed in telling the world is a progressive liberal constitution, if you insist on my amendment being rejected.”

After a long debate on the need for distinct freedom of the press, BR Ambedkar, the Chairman of the Drafting Committee, gave a curt reply. He did not see a point in spelling out freedom of the press, a departure from his earlier position in States and Minorities. He argued that the press did not have any special privileges, it ‘is merely another way of stating an individual or a citizen’. The editor, manager of the press is a citizen who can exercise free speech effectively. Therefore, ‘no special mention is necessary of the freedom of the press at all’.

The strong demands to encode freedom of the press within Article 19 (1) (a), were defeated because the framers did not see the press as a separate category. But the institutional press is distinct from an individual as the press plays a significant role in shaping individual opinions and expression. Was the framers’ omission a mistake in ensuring better protections to the media?