Do entrance exams discriminate against the poor? 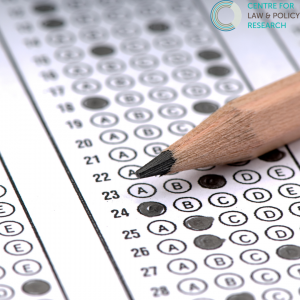 Clause 3 of the CLPR Equality Bill prohibits discrimination on the basis of protected characteristics. 2(oo)(i) lists socio-economic disadvantage as a protected ground, defined as a condition of a person “disadvantaged by poverty, low income, homelessness, or lack of or low-level educational qualifications.”

Direct discrimination refers to discrimination on account of protected characteristics such as sex, religion, caste or socio-economic disadvantage in this case. A law firm which hires only male employees directly discriminates on the ground of sex. Indirect discrimination occurs when the law or policy is seemingly neutral but disadvantages a protected group without adequate justification. If the law prohibits everyone from wearing any headgear during work, it has a discriminatory impact on Muslim women, who want to wear headscarf or Sikhs, who want to wear turbans. The law seems neutral but impacts people differently.

How economic status will play out in cases of discrimination cases is curious. India is one of the world’s most unequal societies. 77.4% of the wealth in the country is held by 10% of the population whereas the bottom 60% owns a mere 4.8%, according to Oxfam. This inequality is naturally reflected in access to educational opportunities, English proficiency and cultural capital.

Admission to professional education – to top medical, engineering and law schools – is governed by competitive entrance examinations. These examinations are often called merit-based – as they test objective skills in entrance examinations, with a given syllabus or structure. However, these exams massively benefit one category of students- the rich. Privilege is often confused with merit. Access to these colleges is often limited by one’s economic and social access to private coaching centres and private schooling. Poorer students find it almost impossible to break the barrier as the economic costs are unaffordable.

Access to coaching classes has life-changing impacts on students. Two students with roughly similar skills are treated very differently, by granting possibilities of a much better career and life for one, and a bleak life for the other. This disparity is one of the most unfair ones, based solely on the accident of birth.

Therefore, the policy of colleges to induct students solely based on test scores might be vulnerable to indirect discrimination on the basis of socio-economic disadvantage. We must also bear in mind that this impact is amplified by structural inequalities that generally prevail in the society: of wealth, education, or social status. Studies say for example, that the representation of upper castes in higher education is much higher compared to the others such as Scheduled Castes and Tribes. The same often goes for men compared to women, in some disciplines.

If a claim is indeed raised against these exams, one justification could be that entrance tests merely reflect the prevailing structural, socio-economic inequality rather than contribute to it. In IMA, the Supreme Court recognised these inequalities (in the context of reservations) magnified by entrance tests.  It remains to be seen how this response is met by courts, but factors like the significance of the good, the extent of deprivation, the costs of alternatives might be worth considering.

To achieve a more egalitarian society, the entrance tests must be discarded in favour of a fairer system which reduces the burdens on underprivileged students. In an article in the New York Times, Ginia Bellafante suggests that a lottery system – randomly selecting students to Ivy League universities – may, in fact, be fairer. This suggestion might be strange, but some say this could give equal chances to all-the rich and poor than granting opportunities only to the privileged. The Jawaharlal Nehru University (JNU) uses a unique system of deprivation points for some courses. If you are from a backward rural area, or region with a low literacy rate or low agricultural productivity, points are added, increasing your chances of admission. Creative proposals to reduce the disproportionate impact of entrance exams on poor students must be further explored, to give them a fair chance to compete. The hope is that inclusion of socio-economic status as an impermissible ground of discrimination in the law will motivate conversations towards that aim.