Consultation on the Freedom of Marriage and Association and Prohibition of Honour Crimes Bill, 2022 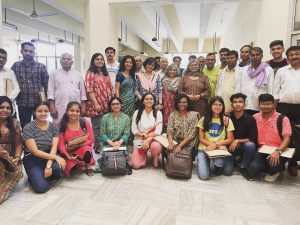 CLPR held a consultation on its draft Freedom of Marriage and Association and Prohibition of Honour Crimes Bill in Jaipur on 16th May 2022. The consultation was held in collaboration with Dalit Human Rights Defenders Network (DHRD Net) and supported by People’s Union for Civil Liberties (PUCL), Rajasthan and Manuski.

The first speaker, R K Ayodaya, Retd District Judge, gave the introduction to honour crimes in Rajasthan, using the relevant cases that were brought to his court. He said that it is a misconception that honour crimes take place immediately after an inter-caste marriage is solemnized. The need to avenge their ‘honour’ been attacked remains in the minds of upper caste men for years. He said that society and law influence each other and this should be considered when drafting laws.

The next session was a discussion between Ms. Kavita Srivastav and Mr. Bhanwar Meghwanshi, both from PUCL, Rajasthan, moderated by Manjula Pradeep, Director of Campaigns at DHRD Net. Ms. Pradeep highlighted the impunity with which honour crimes can be committed. Often, the dominant caste family of the girl murder her or her spouse and hand themselves over to the police. Sometimes the police protection is not enough to safeguard the lives of such couples.

Mr. Meghwanshi spoke about the vocabulary used when we speak about honour. Often the language used is ‘the family’s honour is besmirched’ – but this chips at the agency of a woman to choose her partner. It allows caste, patriarchy and Khap a control over women. He concluded that association of heinous crimes with the word ‘honour’, provides justification in the society.

Ms. Srivastav started by stating that there can be no laws without people’s movements as the people and their intersectionality must be centred in the policy-making process. She critiqued the Rajasthan Prohibition of Interference with the Freedom of Matrimonial Alliances in the Name of Honour and Tradition Bill, 2019 for excluding the hierarchies present within Scheduled Caste communities, Muslims and for lacking better definitions and penalties for honour based crimes.

This session was followed by Advocate Akhil Chaudhary and Iswarya S presenting the existing legal framework for honour crimes in the country. Adv. Chaudhary stated that current provisions of the Indian Penal Code and the SC/ST (PoA) Act, 1989 do not fully capture the nature of honour crimes. For instance, the police may register a murder as a case of abetment of suicide and dilute the penalty. He said the new law should prevent frivolous habeas corpus petitions and reiterate the validity of same gotra marriages.

Iswarya presented on the Court judgments on honour crimes. These judgments have held the right of a woman to choose her partner in Asha Ranjan v. State of Bihar, opined that inter-caste marriages are a way to break caste in Lata Singh v. State of UP, and directed the State to open safe houses for couples in Shakti Vahini v. Union of India. She also outlined how the death penalty was awarded to the accused in State of UP v. Krishna Master, but that it should be avoided, as capital punishment is disproportionately targeted at the minorities.

After lunch, Mansi Singh presented on the need for a separate law on honour crimes. She outlined the existing framework and reasons for its inadequacies. She critiqued the existing draft Bills for not providing a legal structure for dealing with the crimes, including prevention, investigation and rehabilitation. She noted that the lack of legislation has prevented proper reporting of honour crimes in the country.

Finally, Jayna Kothari presented the draft Freedom of Marriage and Association and Prohibition of Honour Crimes Bill. She walked the participants through the different sections of the Bill, inviting comments and questions for each Section. Activists and victims of honour crimes gave feedback to strengthen the Bill. These included adding a monitoring mechanism, a Section stating the removal of 30-day notice period under Section 5 of the Special Marriage Act, allowing investigation to use technology to collect better evidence, and others.

The group concluded the session with the decision to disseminate the second draft of the Bill in many more states. It was agreed that a working group will be initiated in order to strategise for the advocacy of the Bill once the final draft is ready.