Atrocities against Scheduled Castes and Scheduled Tribes: What has changed since 2016?

Recently, the National Crime Records Bureau (NCRB) released the Crime in India Reports for 2017 and 2018 in quick succession, after drawing criticism for the inordinate delay in releasing these statistics. These reports are the primary source of data to track the incidence and reporting of crimes in India and the performance of the police and courts in investigating and adjudicating cases, including those related to crimes against Scheduled Castes (SCs) and Scheduled Tribes (STs).

In the past, we have analyzed NCRB data on crimes against individuals from SCs and STs on three distinct lines – crime rates, the performance of courts and crimes against women. This post builds on this study and reviews the shifts in crime rates and performance of courts between 2016 and 2018 in four Southern States – Andhra Pradesh, Karnataka, Kerala, and Tamil Nadu.

The national crime rate has remained more or less constant since 2016. While both Andhra Pradesh and Karnataka reported a decrease in the crime rate against SCs, Kerala and Tamil Nadu reported an increase. On crime against STs, Kerala once again recorded the highest crime rate in 2018 of 28.5, but this was significantly lower than the reported crime rate of 37.5 in 2016. 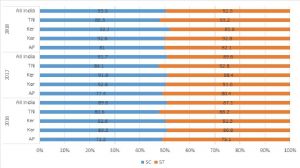 Pendency of cases was the least in Andhra Pradesh among the four Southern States at 72.3% for crimes against SCs and 75% for crimes against STs. The pendency in Karnataka and Kerala remained at around 90% between 2016 and 2018. However, the pendency rate in Tamil Nadu increased by a significant 6 points from around 80% in 2016 to 86% in 2018.

Therefore, we see that not much has changed since 2016. The incidence of crimes, conviction and pendency rates have remained largely constant in the last three years. It would be interesting to see the shifts in these metrics two years from now, given the renewed attention that the PoA Act received with the 2018 decision in Subhash Kashinath Mahajan, the legislative developments thereafter through the Scheduled Castes and Scheduled Tribes (Prevention of Atrocities) Amendment Act, 2018 and the recent decisions of the Supreme Court in 2019 upholding the constitutional validity of the amendment.