Caste Discrimination in South India: A study of NCRB data

On 21 May 2018, The Wire reported the death of a Dalit man in Gujarat who was allegedly beaten to death when he protested the fact that his wife was asked to clean filth, free of charge. This reporting comes only two months after the decision of Subhash Kashinath Mahajan, where the Supreme Court diluted some of the protections under the Scheduled Castes and Scheduled Tribes (Prevention of Atrocities) Act, 1989 (‘Act’). The incident is a striking example of the pervasiveness of caste bias and the prevalence of atrocities in India.

As part of our work on ‘Tackling Caste Discrimination in India’, we are studying the implementation of special statutes enacted for the protection of the SCs and STs in Andhra Pradesh, Karnataka, Kerala, and Tamil Nadu. Each of the four states has a unique history with respect to the challenges in tackling caste discrimination. For instance, while Tamil Nadu had a strong anti-caste movement in the 1960s which continues even today, leftist politics in Kerala has traditionally denied the existence of caste. Interestingly, Kerala records one of the highest incidences of crimes against STs.

In 2016, the per capita rate of crimes against SCs was 20.3, showing a decrease from 2015. The fall was significantly sharper in the case of STs, with the figure plummeting by almost four points.

Some authors have considered this to be a fine tuning of the methodology. However, this ignores the reality that the police often do not register offences against SCs and STs, negligently or otherwise, as the Human Rights Watch has noted. Considering that incidence of crimes is entirely based on FIRs filed, relying purely on offences registered under the Act will impact the completeness of the data.

With respect to the four States – Andhra Pradesh, Karnataka, Kerala, and Tamil Nadu – other challenges to the comparability of data across the three years are evident. In 2016, the NCRB report streamlined various categories of offences while undertaking a State-wise analysis of offences committed against SCs and STs. For the purposes of ease of comparison of data of the four states, we only consider certain offences i.e. Murder, Attempt to Murder, Rape, Attempt to Rape, Kidnapping and Abduction (Total), Assault (Total) and Insult to Modesty of SC Women. 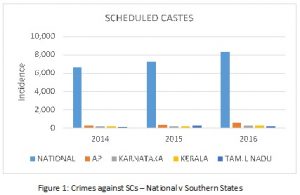 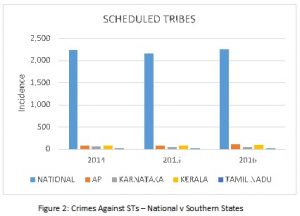 It is evident that in respect of the identified major offences, the contribution of the four Southern States to the national figure is minuscule. The incidence of crimes against SCs in Andhra Pradesh and Tamil Nadu has shown a steady increase. However, Tamil Nadu has registered almost none of the offences considered against STs in the three years. On the other hand, Kerala clocks the most number of crimes against STs with a crime rate of 37.5 in 2016, despite having only 1.5% of India’s STs population.

With these preliminary figures on incidence and rate of crimes against SCs and STs, in the subsequent posts, we will examine the response of the investigating authorities and of the judiciary as well as crimes against SC and ST women, in the four Southern States.