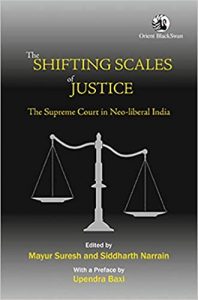 Sudhir and Madhav Khosla’s essay, “Social Justice and the Supreme Court” draws attention to the protection conferred on socio-economic rights, and questions whether the Supreme Court indeed grew less progressive in the 90’s. They offer a test to evaluate a shift in the Supreme Court’s position. The test requires that there is reliable evidence to suggest that a claim made before the 1990’s Supreme Court would have a less chance of succeeding than if it had, under similar facts and circumstances, been framed in the 1980s.