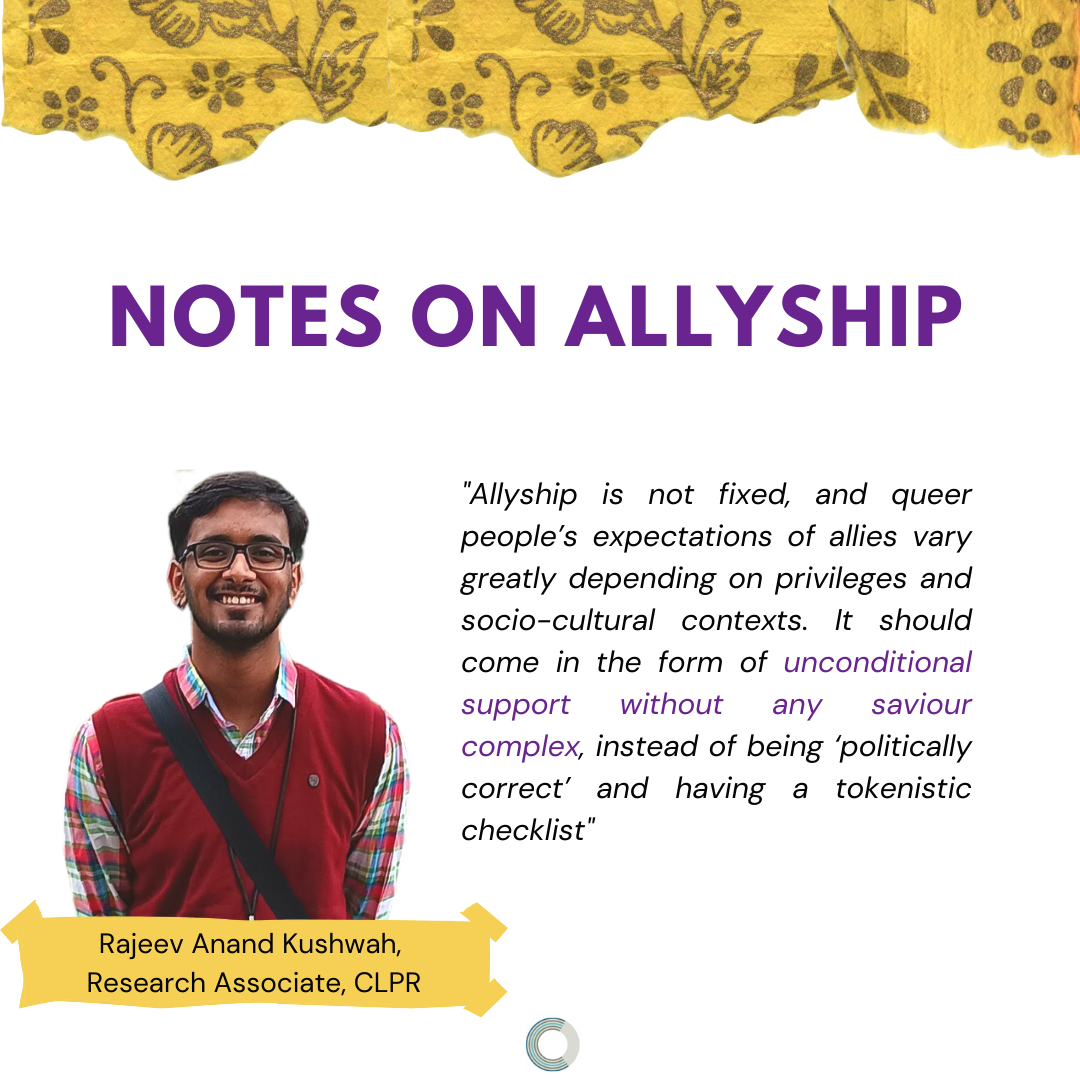 In this opinion piece, published by Gaysi, Rajeev Anand Kushwah explores the understanding of Allyship, exploring what constitutes effective allyship, and what support straight allies can extend to queer movements and communities.

Excerpt from the article

TehQuin D. Forbes and Koji Ueno explore how queer people evaluate straight allies. According to them, there are three distinct allyship forms through expectations from allies: post-gay, political, and ‘pieced together’.  Post-Gay discourse finds allyship supporting queer people only in our personal lives, where queer people’s lives are not lived, but rather negotiated. On the other hand, political discourse around allyship is supporting the queer community and participating in larger political, queer movement. The third discourse, pieced together, is a mix of these two positions.

The meaning of queerness is shaped by historical and geographical contexts. The post-gay allyship is limited to privileged queer people who can mute their queerness and assimilate into the wider heteronormative society. An instance of this can be seen through diversity and inclusion policies in the corporate world, where allyship is very superficial—wearing a Pride T-Shirt in June or using pronouns to appear inclusive only when queer people are present in a given space. There is no political action based on the social justice framework to address the real gaps such as queer people missing at the top of the hierarchy. The focus is on normalising queerness but without challenging the heterosexual matrix.

Political Allyship: “Us versus Them”

The political allyship is centred on the “us versus them” framework, highlighting the differences between queer people and straight allies. This framework is utilised more by queer people with intersectional identities as they’re often the ones who get invisibilised from the broader movement. The discourse on political allyship will have expectations from queer allies that are politicised instead of personalised. The focus is more on informed action and affirmation, which require a systemic understanding of queerphobia and other discriminatory institutions. Political Allyship asks for differences to be affirmed rather than othered.

Allyship becomes complex to define when queer people have expectations that take cues from both post-gay and political discourses. Here, queer people feel that they cannot put too many expectations on allies before they are educated by a queer person first. There is no depreciation of queerness like post-gay allyship nor exclusive focus on queerness and its political aspects like political allyship. Here, the focus is on allies’ intention and willingness to learn rather than their specific action. The problem with pieced together discourse is that it might not address intersectional queer identities, leading to failed allyship.

Allyship is not fixed, and queer people’s expectations of allies vary greatly depending on privileges and socio-cultural contexts. Tashi Choedup, Research Fellow at Anveshi Research Centre for Women’s Studies, believes that we need relationships, not allyship. They should be based on working on a fair and equal world for everyone without any form of discrimination. Allyship should come in the form of unconditional support without any saviour complex, instead of being ‘politically correct’ and having a tokenistic checklist. Allies can help marginalised groups access resources. The support can, at times, come at the cost of assimilation into spaces and cultures that are normative. This goes against the promise of queer politics, where reclamation of spaces was one of the primary agendas.