The discussion began with a brief introduction on intersexuality. Intersex persons are persons who have a combination of male and female biological characteristics. Vino, a member of IPEC, explained that intersex persons are not a homogenous group, but have a range of physical variations in biological sex characteristics. These intersex variations may be apparent at birth itself, or may even become so later in life.

Vino shared his personal experience as an intersex person assigned female at birth. He explained that while growing up, there was no awareness of ‘intersex’ as a valid sex category. Vino identifies as male and aims to engage with other stakeholders to create awareness and advocate for intersex recognition and rights.

‘Brief Guidelines on the Rights of Intersex Persons’

Some IPEC members had drafted guidelines, divided into three parts: (1) for medical professionals, (2) for law and policy-makers, (3) for media professionals, families, caregivers, employers, and the general public. They offer an overview of how intersex persons’ rights are to be considered in different spheres.

Each of the guidelines begins by providing an overview of the difference between “sex” and “gender”. The guidelines for medical professionals includes common terminology and practices undertaken by medical professionals in addressing transgender persons. This includes recommendations to eliminate cosmetic or “corrective” medical procedures which do not address health risks, such as intersex genital mutilation (IGM; where a child is subjected to reconstructive or cosmetic surgeries so that their biological characteristics match the gender assigned to them). The law and policy guidelines provide an overview of the legal framework and discuss the legal definition of “intersex persons”. Finally, guidelines for the public seek to de-stigmatize intersex persons and promote equality and inclusion. 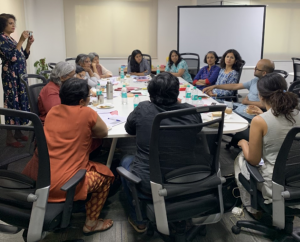 Legally Defining and Differentiating between “Transgender” and “Intersex” Persons

IPEC first invited the attendees to review the draft guidelines for law and policymakers. The group started by discussing the need to legally differentiate ‘transgender’ and ‘intersex’ persons. In 2014, the Supreme Court of India had recognised the rights of transgender persons in the NALSA judgment. However, the guidelines pointed out that the judgement posed some problems with regard to recognition of intersex people.

The attendees pointed out that the term ‘transgender’ was, and is being used as an ‘umbrella term’ to also include intersex people, in spite of the fact that there are basic biological differences between transgender persons and intersex persons.

Some attendees argued that legally differentiating between ‘transgender’ and ‘intersex’ was not beneficial for two reasons. First, it could lead to the denial of certain legal benefits, like reservations. Second, it could also cause fragmentation of the social movement towards protecting the rights of gender minorities. They suggested continuing using ‘transgender’ as an umbrella term for people with diverse gender identities. This would not erase intersex recognition but further an inclusive movement for all persons falling under the umbrella.

Other members argued that legal differentiation between transgender and intersex persons was valuable. They argued that the needs of the communities were different and sometimes even contradictory. For instance, IGM is a unique experience of the intersex community. IGM can have long-lasting physical, psychological and emotional repercussions. It is useful to note that IGM has been included within the purview of the UN Convention Against Torture and the UN Convention on the Rights of the Child. The guidelines pointed out that currently, the state is talking about bringing in financial support for Sex Reassignment Surgeries (SRS) for transgenders. Members are apprehensive that this could ‘legitimise’ or increase the possibility of IGM of intersex children since doctors could perform IGM in the guise of SRS.

Some attendees pointed out the shame and confusion associated with growing up intersex can be addressed most effectively through education and awareness initiatives. It is important to differentiate between intersex and other gender identities since ‘intersex’ is a separate ‘sex’ and not an independent gender identity. The members agreed that as a society, we are unable to differentiate sex from gender, which is inaccurate and causes stigma against diverse sex and gender minorities.  The group came to the broad consensus that there should be legal differentiation between transgenders and intersex persons.

The seminar ended with a discussion on ways to strengthen awareness around intersexuality. The guidelines proposed that mentioning ‘sex’ in birth certificates could be made optional to reduce the likelihood of IGM at birth. Many members of the group agreed with this point. The group also noted that there is no population data available nation-wide for intersex persons. They discussed the inclusion of ‘intersex’ as a separate sex category within the Population Census to remedy the same.

Overall, the IPEC seminar was vibrant and dynamic, with diverse perspectives and constructive debates. The members hope to create more awareness and recognition for the rights and issues facing intersex persons through the proposed guidelines.