Workshop for Lawyers in Kerala on the SC/ST (Prevention of Atrocities) Act, 1989 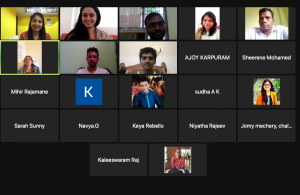 On 4th September 2021, CLPR conducted a workshop for lawyers in Kerala on The Scheduled Castes and Scheduled Tribes (Prevention of Atrocities) Act, 1989 (“PoA Act”), and the Rules. The workshop consisted of two sessions – the first focused on the overview of the statute and the Rules and the second focused on the implementation of the Act.

The workshop was organised in the course of our efforts to work towards better implementation of the laws around caste discrimination in India. The objective behind such workshops is to increase the engagement of lawyers with the PoA Act, to further build the capacity of litigating lawyers and enable them to provide better legal aid to the victims and witnesses of caste discrimination.

The first session was led by Jayna Kothari, Senior Advocate and Executive Director of CLPR. She detailed the provisions of the Act – particularly the nature and type of atrocities addressed under Section 3,  aspects relating to externment under Section 10 and jurisdiction of Special Courts under Section 14. She spoke on the rights of witnesses and victims under Section 15A and detailed various provisions of the Rules. Concluding the session, she stated that while some judicial interventions have attempted to dilute the nature and the impact of the law, the Act has an enormous scope for providing justice to victims of caste atrocities.

The second session was led by Adv. Preetha, Senior Pleader at Kerala High Court who detailed her experiences of conducting cases under the PoA Act. She said that implicit bias in the system prevents the victims from access to justice. The legal system is wholly unfamiliar and intimidating to the victims due to lack of transparency and rigid legal procedure. She said that attempts are made by the police and the authorities to deliberately exclude PoA in cases where it must be invoked. All these reasons lead to a high number of acquittals under the law. Responding to the criticism that the law is misused, she said that ‘the law is in fact, not being used by victims.’ She remarked that Special Courts under the law have unfortunately turned into ‘settlement courts.’

Ms. Dhanya Raman, social activist from Kerala, discussed various atrocities faced by the marginalised communities in Kerala. She spoke about sexual atrocities against women and rapes of minor adivasi children. In many cases, due to lack of evidence, the accused persons are acquitted. She remarked that the ‘law clearly has a caste’ and it is not free from inherent biases and prejudices. For instance, police officers refuse to register cases under the PoA Act despite being asked to do so. The delay in judicial adjudication has led to ‘freezing’ of the Act, where the Act exists in theory, but is difficult to implement in practice.

Thulasi K. Raj moderated the session and translated the parts of discussion which took place in Malayalam to English. Mansi Singh delivered the concluding remarks.

The workshop concluded with a Q & A session with engaging questions and comments from the audience on issues like property grabbing from SC/ST communities by dominant caste groups, the reasons for high number of acquittals, etc.