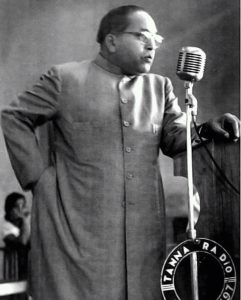 B.R. Ambedkar’s seminal contribution to Indian constitution-making as the Chairman of the Drafting Committee is widely celebrated and acknowledged. Less known was his initial critique of an Indian Constituent Assembly in the mid-1940s. On 6 May 1945, Ambedkar addressed a gathering of the All-Indian Scheduled Castes Federation. Instead of speaking about the sectional interests of the Scheduled Castes, he chose to speak on a ‘topic which is general and has wider appeal, namely, the shape and form of the future Constitution of India’.

He asked ‘Should there be a Constituent Assembly, charged with the function of making a Constitution?’. For the Indian National Congress, the answer was and had been a yes, for almost a decade. The Congress beginning in the mid-1930s had made the demand for an Indian Constituent Assembly central to its political negotiations with the British.

For Ambedkar, the answer was a firm ‘No’. He stated that a Constituent Assembly was ‘absolutely superfluous. I regard it as a most dangerous project, which may involve this country in civil war’. Notice that his resistance to a Constituent Assembly is rather vehement and signals deep conviction. In his speech, he provides two sets of reasons for his position:

First, he felt that, unlike the time when the Americans were framing their Constitution in the late 1700s, ‘Constitutional ideas and constitutional forms are ready at hand’. India had to merely pick and choose from a few ready-made constitutional designs. Further, there was not a great deal of dispute among Indians regarding various constitutional features.  The Government of India Act 1935 pretty much contained the Constitution of India, and all one had to do was to remove those sections of the Act which were inconsistent with independent India’s sovereignty.  Therefore, a Constituent Assembly was not required, argued Ambedkar.

All this said, a Constituent Assembly began functioning as per the Cabinet Mission Plan in December 1946. Despite his initial reservations, Ambedkar joined the Constituent Assembly. This could have been a result of political pragmatism: If a Constituent Assembly was indeed being set up, then it would be politically dangerous for Scheduled Caste representatives to stay out of it and not attempt to protect their interests. It is also plausible that Ambedkar’s concerns were at least partly addressed when the Congress, despite its numerical electoral superiority,  worked hard to ensure a wide representation of all communities in the Assembly, including constitutional and legal experts who had no party affiliation whatsoever.

It didn’t take long for Ambedkar’s constitutional and legal pedigree to be recognised in the Assembly. Soon he was elected Chairman of the Drafting Committee and from this position, piloted India’s constitution-making project.

Ambedkar’s opposition to the Constituent Assembly does not diminish his eventual contribution to constitution-making. It must be viewed as a complex strand of Ambedkar’s engagement with the constitutional future of India under specific political contexts and his deep conviction that majoritarianism and dominant group interests should not stain the founding of the Indian republic.