Who’s on Trial Here?: A Deep Dive into the Tarun Tejpal Verdict 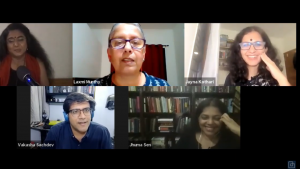 The Centre for Law & Policy Research (CLPR), in association with the Network of Women in Media (NWMI) and the Bangalore International Centre (BIC), conducted a session looking at the legal issues and concerns in the widely-criticised Tarun Tejpal judgment.

Laxmi Murthy began the event by drawing parallels between the Tarun Tejpal judgment and the Mathura judgment of 1972. She highlighted that male entitlement and judicial attitudes in dealing with rape and sexual offences remain regressive and unchanged.

Anna MM Vetticad pointed out that the Tarun Tejpal case was the first high-profile case under the Criminal Law Amendment Act, 2013. The case presented some hope in building awareness about it. Instead, the survivor was put on trial. Her every action was heavily scrutinised. Vetticad then referred to the three apology letters sent by Tarun Tejpal which she said effectively amounted to admissions of guilt.

One of the letters accepted that he violated a longstanding relationship and that he had attempted a sexual liaison despite clear reluctance. Notwithstanding this, the judgment stated that Tejpal sent the letter ‘under pressure’ imposed by the survivor. This ignored the power equation as the survivor was an employee of Tarun Tejpal.

Jayna Kothari highlighted two main issues. She talked about the ‘digital strip search’ of the survivor. The courts allowed the survivor’s messages and other digital information to be shared not just with the police but with the accused. This was used to assail the survivor’s character by looking at her personal life and sexual history which was wrongly used to determine the issue of consent. Kothari highlighted that this would erode trust in the criminal justice system, and needed to be restricted.

Kothari also talked about the absence of an internal complaints committee (ICC) at Tehelka. Organisations have a duty to set this up, but it was the survivor who had to insist on it. If the ICC was present, the chances of a finding of sexual harassment through a civil law route would have been easier.

Jhuma Sen highlighted the erroneous understanding of consent in the judgment. She talked about how the Court dismissed the three apology letters by the accused. Instead, the Court examined the conduct of the survivor, picking at minor contradictions in her account. Sen also discussed how this is not rare. In the Raja case, for example, the Court looked at the conduct of the survivor after the assault. This tended to create a ‘hierarchy’ of survivors based on the survivor’s conduct, or in this case, also their awareness of the law.

Sen also put the Tarun Tejpal judgment in the context of the Justice Verma Committee Report, based on which the 2013 Amendment was enacted. However, despite this change, the Courts, including Special Courts like in this case, continue to produce such judgments.

Vakasha Sachdev examined the media coverage of the trial. He said the problem began with the debate on CCTV footage in the media. Those who had never seen the footage spoke as if they had, and some had seen it when they never should’ve had legal access to it. Sachdev pointed out that the Supreme Court had provided Tarun Tejpal more than he asked for, which enabled the ‘digital strip search’. Further, he pointed out that journalists receive very little training in covering cases of sexual harassment. He stressed the importance for journalists to study the law regarding the protection of survivors’ privacy.

This blog was co-authored by Ajoy and Mihir. Ajoy works at Supreme Court Observer(SCO) and Mihir works at CLPR.