Analysis of use of UAPA from NCRB data 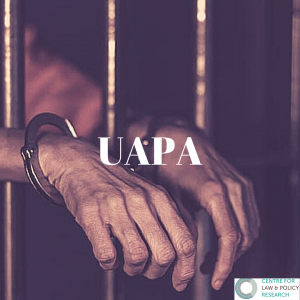 The use of the Unlawful Activities Prevention Act, 1967 (“UAPA”) in the last few years needs critical analysis, especially in light of the increasing use of the UAPA. What is surprising is that while the UAPA was enacted in 1967, its constitutionality has never been challenged in any of the High Courts or the Supreme Court. The UAPA has had several amendments, and the most recent amendments being made in 2019 amending Section 35. This amendment allows the Government to even categorize individuals involved in terrorism and not just organizations. It is only the 2019 amendments that have been recently challenged in the Supreme Court in two recent petitions.

This post is the first in a series of posts where we are trying to document and analyze how the UAPA is being used. We studied the National Crime Records Bureau (NCRB) reports from the year 2010 to 2018 (which is the most recent NCRB report released) to get an understanding of how many cases have been filed under the UAPA since 2010. The NCRB reveals interestingly that there were no crimes registered under the UAPA before 2014. Even the crimes registered under the Terrorist and Disruptive Activities Act, which was repealed, is “0” from 2006 onwards. There could be some UAPA cases included generally under the heading ‘other SLL crimes” but it seems unlikely because in subsequent years the UAPA is marked a separate crime head. The NCRB records crimes under the UAPA only from the year 2014 and from 2014 there is a rise in the use of UAPA. The total numbers of cases filed under the UAPA rose from 976 in 2014 to 897 (2015), 922 (2016), 901 (2017), and 1182  (2018).

The outlier State has been Kerala which despite having a left government, has seen a steady rise in the cases of the UAPA with only 30 cases registered in 2014 and increasing to 185 arrests in 2018.

The 2018 NCRB report also mentions that 3920 UAPA cases are pending investigation from previous years with the added reportage of 1182 fresh cases, totally making it 5107 cases under the UAPA pending totally till 2018.  This shows that once accused are charged under the UAPA, while bail is rarely granted, trials take years to complete with a majority of the cases even from 2014 not having completed trial. With this data, it is therefore important to ask how the constitutional rights of the accused can ever be guaranteed.

This blog is authored by Prerna Dadu, a 5th year student at Jindal Global Law School.