The Supreme Court in Review, 2019 | Summary of Proceedings

In November 2018, the Centre for Law and Policy Research (CLPR) hosted the first National Constitution Society (NCS) Convention. The Convention provided students a platform to critically engage with academics, lawyers and civil society leaders from across the country, on the history and contemporary relevance of the Indian Constitution. This included reviewing key Supreme Court judgments from 2018, such as the Sabarimala and Triple Talaq verdicts.

The ‘Supreme Court in Review, 2019’ comprised three panels that touched upon the themes of democracy, Supreme Court reform, and faith and religion. 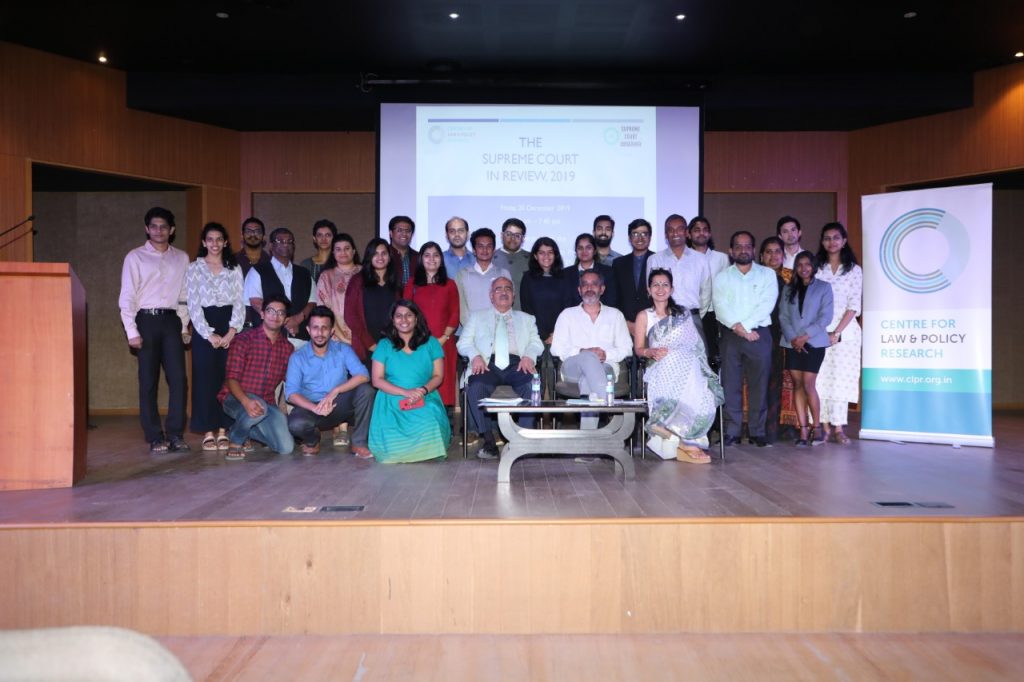 Malavika Prasad, advocate and doctoral fellow at NALSAR University of Law, shared her thoughts on the scope of Money Bills. Analysing the Puttaswamy (2018) and Rojer Mathew judgments, she argued that the recent passing of the Aadhaar Bill and the Finance Bill, 2017 as Money Bills, poses a threat to Indian bicameralism.

Venkatesh Nayak is the director of the Access to Information programme at the Commonwealth Human Rights Initiative. He discussed issues pertaining to the Voter Verified Paper Audit Trail (VVPAT) system. He asserted that the Supreme Court should have directed the Election Commission to match a higher number of VVPAT slips than the Court did in May. He contended that the current vote counting system, which relies on EVMs and VVPAT, fails to establish enough trust in voters.

(Note: originally Dr. Jagdeep S. Chhokar was scheduled to speak on this panel instead. However, as his flight was cancelled, Venkatesh Nayak took his place)

Venkatesh Nayak opened the second panel by taking the audience through the Supreme Court’s RTI jurisprudence. He praised its recent RTI judgment, which brought the Office of the CJI within the scope of RTI requests. However, he said that it suffered from ambiguities, which would result in inconsistent CPIO orders.

Apurva Vishwanath, Assistant Editor with the Indian Express, offered an assessment of the Supreme Court in 2019 by looking at CJI Ranjan Gogoi’s performance. She pointed out problems that arose due to the Chief Justice’s use of his discretionary powers, highlighting, for example, the sexual harassment controversy.

Vakasha Sachdev, Associate Editor (Legal) with The Quint, argued for a culture of healthy criticism directed towards the Supreme Court. He asserted that the impunity that Supreme Court judges enjoy from public scrutiny is not conducive to a strong judiciary. He balanced this by saying that judges should only be assessed in terms of the judgments they author, not for their personal conduct.

Suhrith Parthasarathy, Advocate in the Madras High Court analysed the Supreme Court’s Collegium system by using Justice Akil Kureshi’s recent appointment as a case study. He asserted that the current system suffers from inherent structural problems, such as a lack of transparent rules. He also touched upon issues of judicial transfers and recommended reform in judicial accountability.

Hon’ble Mr. Justice (Ret’d) Ashok B. Hinchigeri discussed Justice Indu Malhotra’s dissent in the 2018 Sabarimala judgment. Sharing his personal views, he warned against the judiciary engaging in ‘ecclesiastical matters’. He stressed that an individual’s right to freedom of religion cannot override that of a group’s.

Senior Advocate Jayna Kothari, co-founder of the Centre for Law and Policy Research, took the audience through the Court’s Sabarimala verdicts (2018 judgment and 2019 review judgment). She highlighted how in the 2018 judgment, the Court had found that devotees of Lord Ayyappa do not constitute a separate religious denomination and hence are subject to the social reform mandate under Article 25(2)(b). Turning to the review judgment, she focused on Justice Nariman’s dissent, which criticized the majority for its very broad interpretation of the Court’s review jurisdiction.

Sidharth Chauhan, Assistant Professor at NALSAR, concluded the day by taking the audience through the history of the Ayodhya title dispute. He also touched on larger issues pertaining to secularism in India. Relying on Rajeev Bharagava’s writings, he argued in favor of a non-Western version of secularism for India, which has elements of the ‘equal respect framework’ and communitarianism.

Video recording of the event to be made available shortly