The Demand for Transgender Rights and Democracy | Roundtable 2 | Transform 2021 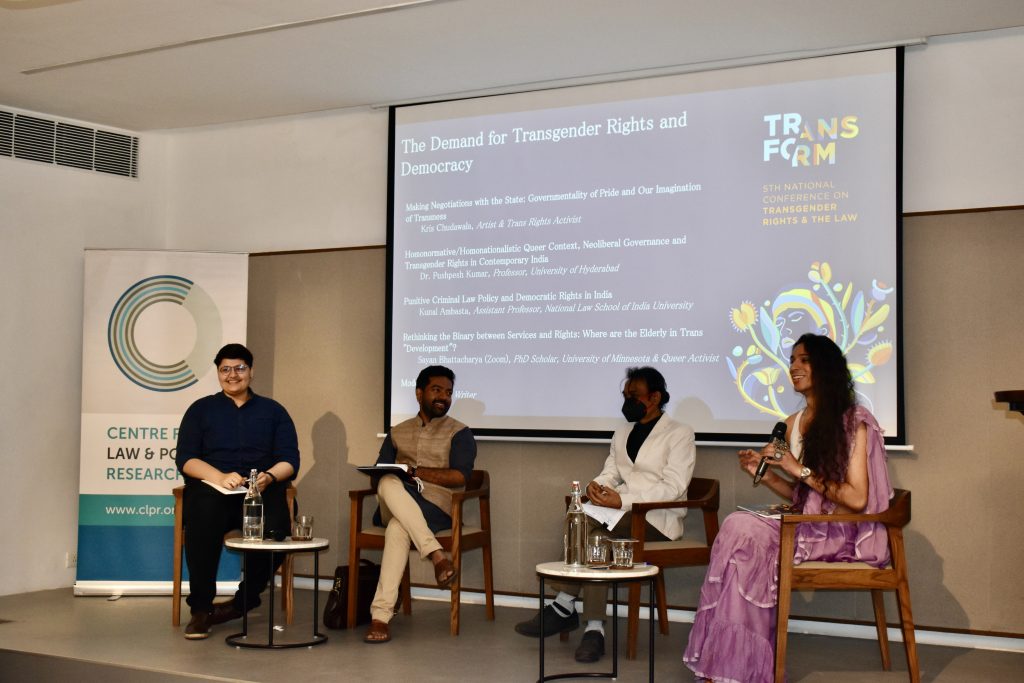 This is a brief summary of the panel on Transgender Rights and Democracy at Transform 2021. The full video of the panel can be viewed here.

Kunal Ambasta, Assistant Professor of Law at NLSIU, discussed the gatekeeping role played by law for democratic rights. Law regulates everything from access to ART (antiretroviral medication) to reproductive rights. It decides who is included and who is excluded, regulates what the body can do and which bodies can do it. He used the concept of rape as an example to elaborate the simultaneous invisibility and hypervisibility of transgender persons. While rape has massive punitive measures for cis women (under Section 376 of IPC), for transgender persons, it has been watered down as ‘sexual abuse’ (under the Transgender Persons Act) with far less penalty. He extended the concept of visibility to say that under NALSA (National Legal Services Authority v. Union Of India), while the rights of transgender persons remain invisible, the governance measures have become hyper-visible. He ended his talk with a thought – democracy is punitive by implication, but who is this punitiveness supposed to protect?

Dr. Pushpesh Kumar, Professor at the University of Hyderabad, spoke of the divide in the demands of the privileged queer and marginalised transgender persons. He examined such demands during the pandemic – while many from the transgender community were asking for basic needs like ration, medicines and vaccination to be met, the privileged queer were petitioning for same-sex marriage in the High Court. He elaborated that by virtue of their class positions, the upper-class queer are in a position to demand civil rights and seek assimilation with society through the institution of marriage. On the other hand, transgender persons are still demanding the implementation of the NALSA judgment. He concluded that the middle and upper-class queer have a duty towards the marginalised queer to ensure that allocation of resources by the State are structured in ways that benefit the whole community.

Kris Chudawala, artist and trans rights activist, began their discussion with a question – what is the demand for rights and whom do we demand them from? They stated that, for transgender persons, their daily existence is a constant negotiation with the state. However, the concept of democracy must extend beyond the definition of state and rights to include the organisational spaces such as the society and community and the freedom to assert yourself within those spaces. For instance, it is the State’s duty to provide you with legal and medical services but the rights of transgender persons do not stop here. There are other demands, such as horizontal reservations and citizenship – that result from other identities besides gender – that require community organisation. Ideas of kinship and joy come from online spaces, which translate into services and mutual aid eventually. Kris’s talk dealt with expanding the spaces from whom democratic rights can be demanded.

Finally, Sayan Bhattacharya, Ph.D. scholar at the University of Minnesota and queer activist joined the discussion. They focused on the rights of elderly transgender persons, situated in the context of the long-lasting pandemic. With expenses drying up, non-governmental support has lessened. As long as health and care work are seen as services and not rights, there will not be dignity in such assistance. For instance, demands during the pandemic for rations have focused on the distribution of grains, but not on their quality. Since care is not institutionalised as a right, the elderly transgender persons have to depend personal relations, which in turn depend on likability, caste, class, level of ‘passing’ etc. Even State support is limited and exclusionary. Garima Grihas (shelter homes for transgender persons) still exclude transgender persons engaged in sex work and begging, remain inaccessible to persons with disability and monitor its inhabitants constantly through CCTVs, depriving them of any privacy. In such circumstances, where are the rights of elderly transgender persons?

In this roundtable on democracy and rights, the panellists brought different views on the concepts of rights, demands and democratic spaces to the table. These perspectives, spoken as a mix of academic thought and lived experiences, helped the audience broaden their ideas of democratic rights and illustrated how the demands for rights are being shaped by transgender persons and the community.