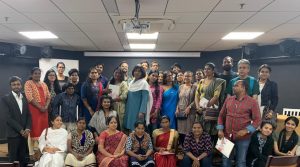 On 27th January 2020, CLPR organized a workshop titled ‘Tackling caste discrimination through Law’, for activists, NGO representatives, and CSO representatives. The workshop aimed at enabling and facilitating a better understanding of caste discrimination laws such as The Scheduled Castes and Scheduled Tribes (Prevention of Atrocities) Act, 1989, The Protection of Civil Rights Act, 1955, The Prohibition of Employment as Manual Scavengers and their Rehabilitation Act, 2013 and The Andhra Pradesh Devadasis (Prevention of Dedication) Act, 1982.

The main objective behind this workshop is to build the legal capacity for civil society organizations and activists working on tackling caste discrimination and increase their engagement with the laws relating to caste discrimination in India. The idea was to create a single platform where activists and representatives can engage in conversations and discuss the challenges they are facing in the implementation of these legislations.

This blog post presents the key points raised and discussed at the workshop.

Session I – The Scheduled Castes and the Scheduled Tribes (Prevention of Atrocities) Amendment Act, 2015 and The Protection of Civil Rights Act, 1955

This session was taken by Kiruba Munusamy, Supreme Court Lawyer and Dalit Human Rights Activist and Dr. Shyamala Gogu, Dalit Feminist, Writer, and Researcher. Kiruba Munuswamy started the discussion by stating some disturbing facts regarding atrocities and violence against SC & ST communities. For instance every 15 minutes, six Dalit women are raped and the institutional murder of Dalit students happens frequently in various institutions of the country. Dalits students are stigmatized in the name of reservations.  She also highlighted the prejudices prevalent in the judiciary through her personal experiences. She discussed important cases to highlight the reasons for high pendency and delay especially cases related to caste atrocities.

Dr. Shyamala Gogu, discussed mainly how the rising awareness about caste discrimination and graded inequality led to assertiveness among Dalits which posed a threat to social order. This has led to structural violence  against the Dalit community. She also pointed out that though cities may appear to be glossy on the outside, they are not casteless. Graded inequality has steeped into all the pillars of democracy be it judiciary, legislative bodies, media or bureaucracy. She expressed that despite anti-caste collectivization, discrimination and structural exclusion is rampant in university spaces while discussing the institutional murder of Rohith Vemula.

Jayalakshmi, Equality Fellow at CLPR started the panel by giving an overview of the Andhra Pradesh Devadasis (Prevention of Dedication) Act, 1988 which prohibits the practice of Devadasi dedication prevalent among the SC/ST community. She also compared AP law to the other existing  legislations tackling devadasi practice.  Thereafter Dr. Sowjanya Tamalapakula, Associate Professor, TISS discussed various myths around the practice of devadasi dedication. She stated that her study revealed that not only women but also men are dedicated as devadasi. This was openly done in various temples around the state of Telangana was recognised as religious prostitution. As per her study more than 80 thousand “joginis” still exist in states of Andhra Pradesh and Telangana.

The workshop concluded with interesting ideas and future plans to keep these conversations going and to come up with strategies on improving the implementation of these legislations to tackle caste discrimination.

This blog is authored by Ritambhara Singh.