‘Reimagining Bail Decision Making: An Analysis of Bail Practice in Karnataka and Recommendations for Reform’ 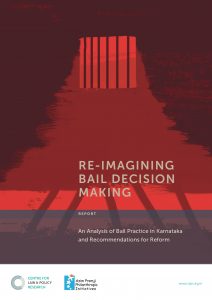 India’s ballooning under-trial population is a serious challenge to the effectiveness and legitimacy of the criminal justice system. The most recent, yet dated Prison Statistics released by the National Crime Records Bureau (NCRB) in 2018 pegs India’s under-trial prison population at around 67% or two-thirds of the total prison population. Academic and policy literature on prisons and under-trial detention have conventionally focused on a doctrinal analysis of provisions on bail or on the conditions of detention, relying primarily on data from prisons and police stations, compiled by the NCRB. However, the crucial point of entry of a person into the prison system at first production in the courts after arrest has received no research attention.

A brief analysis of the relationship between arrest and detention underscores the need to study the role of courts in maintaining the level of under-trial detention. Out of 61,30,507 persons arrested in 2016, 4,18,536 were in prison at the end of the year. However, in 2018, out of 55,08,190 arrested persons, 4,66,084 continued to remain in prison at the end of year Despite a 10% reduction in arrests in 2018, the level of detention increased, begging the question – why are enough detainees not being released on bail pending investigation and trial?

The Centre for Law and Policy Research’s empirical study titled ‘Re-imagining Bail Decision Making’ looks at bail decision making in trial courts in three districts in Karnataka – Bengaluru, Dharwad and Tumakuru. It documents the outcomes on the first production of an accused before court and evaluates the influence of different factors on a decision on whether bail is granted or not. We adopted two methods of data collection for the study: (a) Through court observations of ‘first production’ of accused persons, over a period of 45 days to examine if a majority of arrested persons were detained at this stage and (b) Examining court records of cases in the pre-trial stage, over a period of 6 months for a broader review of bail decision making in the pre-trial stage. At each stage, we studied the influence of certain identified substantive and procedural factors on bail decisions.

The research focuses on the courts, which are the primary site at which decisions on granting bail are made, to understand what guides the grant or non-grant of bail and what are the factors which decide whether bail is likely to be granted or not. These include the statutory basis for the offence, the nature of offence, its classification as bailable or non-bailable, the punishment prescribed and effective legal representation by lawyers.

We make the following recommendations for reform. Statutory reform includes the need to re-think the classification of bailable and non-bailable offences and expand the number of bailable offences to align with considerations such as the level of seriousness, degree of violence, and injury caused and a need to distinguish between the pre-trial and under-trial stages of the criminal justice process as different considerations should guide bail decision making at each stage. There should be Judicial reform which would standardise bail applications and create protocols or checklists for judges to limit discretion available in bail decision making and designing protocols for record keeping of cases at the lower court level. There should also be Institutional reform to enhance the effectiveness of the existing legal aid system and institute a pre-trial services system that uses non-custodial measures to ensure presence during trial and explore alternatives to the cash bail.