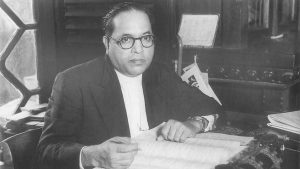 4th November 1948 was a critical date in India’s constitution-making process: B.R. Ambedkar, Drafting Committee Chairman, formally introduced the Draft Constitution in the constituent Assembly. This ‘formidable’ (as Ambedkar referred to it) document, containing 315 Articles and 8 Schedules, was the culmination of the Assembly’s work, particularly its committees, that began on 9th December 1946. From this point onwards, all of the Assembly’s debates – 114 out of 165 sittings – centred around this Draft. These debates mark the most intense phase of Indian constitution-making.

While introducing the Draft, Ambedkar made a long and comprehensive speech that would become famous in post-independent India. He provided the Assembly with an overview of India’s constitutional architecture, its important features, and principles that informed various provisions. It was in this speech that Ambedkar for the first time used the term ‘constitutional morality’ – which has, in recent years, been widely invoked by academics, activists, journalists, and the legal community.

In the days that followed the introduction of the Draft, Assembly members expressed their preliminary impressions of the document and engaged with Ambedkar’s speech. While some were broadly satisfied, others were not.

One aspect of the Draft and Ambedkar’s speech triggered significant controversy and conflict: the role of ‘villages’ in India’s administrative and political setup. Some members were unhappy that the Draft did not pay emphasis to or incorporate provisions based on village panchayats – or villages in general. In his speech, Ambedkar responded to this criticism by launching a searing attack:

‘..What is the village but a sink of localism, a den of ignorance, narrow-mindedness and communalism? I am glad that the Draft Constitution has discarded the village and adopted the individual as its unit…’

In the days that followed, a group of Assembly members took turns to rebuke Ambedkar. Shibban Lal Saxena drew from his experience working in villages to argue that Ambedkar’s impressions were wrong. Further, he invoked the Soviet village republics which he believed were models of good self-government. Others like H.V. Kamath suggested that Ambedkar’s ideas about villages were a symptom of Ambedkar not having been part of the freedom movement – a movement that placed the village at the core of its struggle.

After around 10 days of general discussions on the Draft, the Assembly on 15th November 1948 began a more focused exercise of debating and considering amendments around each Article of the Draft Constitution – a process that would go on till 17th October 1948. The Assembly finally adopted the Constitution on 26th November 1949.