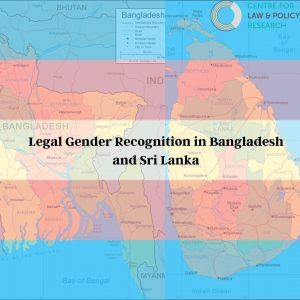 The State legally documents the gender of an individual from birth. For trans persons, the ability to have their gender recognized in official documents is an integral part of their right to life and dignity. Recent developments in Bangladesh and Sri Lanka relating to the legal recognition of the trans community’s right to gender recognition have been hailed as progressive; but do they go far enough?

On January 26 2014, the Bangladeshi cabinet formulated a policy creating a distinct third-gender category – ‘hijra’- for trans persons. While this indicates that the State views ‘hijra’ as an umbrella term for all trans people, the term is considered to exclude other communities

The policy also does not lay down any guidelines on the definition of ‘hijra’, nor does it outline the procedure to change gender identity on official documents. This means that government officials and medical professionals, both of whom play an important role in implementing the policy, will have to rely on their individual understanding of these terms. Therefore, trans people continue to remain at risk of abuse, while the process of realizing their right to recognition of their gender identity will be rife with uncertainty.

Sri Lanka was, until recently, considered a jurisdiction unfavourable to sexual minorities. This was primarily due to its Vagrancy Ordinance of 1842, which was used to target and incarcerate trans people. It is viewed as one of the driving forces behind the abuses perpetuated by State officials and individuals towards the trans community.

However, in 2016, in response to a petition filed by a trans woman before the Sri Lankan Human Rights Commission, the Health Ministry formulated a policy on the issuance of gender recognition certificates for the trans community. This policy contains clear guidelines for medical professionals and government officials on the procedures to be followed when changing gender identity on official documents. It does not mandate gender reassignment surgery, and makes it easier for trans individuals to access government welfare schemes; as such, it has been heralded as a progressive move.

The policy does suffer from some discrepancies, which primarily relate to the right to privacy. The form of the gender recognition certificate mentions the person’s previous name and their gender assigned at birth. Moreover, there are no guidelines to ensure that the identities of trans persons will remain private. Therefore even the progressive Sri Lankan system needs to be strengthened to ensure that these individuals’ right to privacy is protected.

Although the official recognition of the trans community’s right to gender identity in Bangladesh and Sri Lanka is a positive first step, it is only the first in the movement to eliminate discrimination against the community. It is clear that the existing laws in these countries suffer from some infirmities, which must be addressed to protect the rights and interests of the community; this must occur along with the passage of a strong Anti-Discrimination Law to ensure substantive equality.

This blog is authored by Prathiksha Ulla, an undergraduate law student from Christ University.