Intersectional Nature of Discrimination- the Case of Koraga Tribe 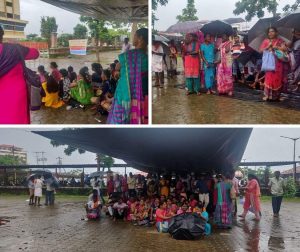 Image Description: ‘Members of the Koraga Abhivridhi Sanghagala Okutta assemble outside the DC office, Manipal, to protest the misuse of funds assigned to the community’

This post will focus on the Koraga Tribe in Karnataka and Kerala, and the intersectional nature of the discrimination they face. While the Koragas are classified as a Particularly Vulnerable Tribal Group (PVTG), their population continues to dwindle and they remain in abject poverty.

It was only after a drawn-out agitation by the Koraga that Ajal practices were finally prohibited by the Karnataka Koraga (Prohibition of Ajal Practices) Act in 2000. In these practices, the upper-caste Hindus offer Koraga food mixed with hair strands and pieces of nails of those experiencing health, financial, or other problems. The Koraga are deemed to be ‘polluted’ so such acts are said to ward off death. The Act, two-pages long, does not cover the intricacies of such practices.

The Koraga face discrimination not only due to their tribal identity but also linguistic and occupational identities. The concept of ‘pollution’ means that their work is largely reduced to scavenging, which leads to acute health issues. It also forbids them from entering non-Koraga houses and temples (where they are, nevertheless, expected to perform song and dance rituals without remuneration).

Moreover, their language is looked upon with suspicion. Writers like Ullal Raghavendra Rao have referred to them as jealous people for not sharing their language with outsiders while disregarding the fact that it was an act of self-preservation against medieval invaders. Although linguists like D N Shankara Bhat have claimed that the two are separate, Koraga is counted as a dialect of Tulu language and not recognized by the State.

A report by Dr Peer titled ‘Social Economic and Educational Conditions of Koragas – An Action Plan’, 1994, claimed that “modernisation and industrialization have not improve(d) their social status.” This is not surprising since an administration comprising upper-caste Hindus alone cannot ensure the proper implementation of land reforms and welfare programs aimed at Koraga.

The Equality Bill 2020 (Bill) deals with the prohibition of discrimination and segregation at sites of education, employment, healthcare, and housing among others. Under it, ‘tribe’, ‘language’, ‘occupation’, ‘descent’ have been categorized as ‘protected characteristics’, i.e. must be protected from systemic disadvantage. Hence, it covers multiple dimensions of Koraga identity.

Chapter III, Clause 19, calls for the establishment of a Diversity Index which is aimed at diversification of the workforce, which would bolster their participation. In addition to it, the Bill has provisions for civil remedies instead of criminalizing such offences. This allows for a lower burden of proof while also ensuring a lower rate of acquittal, which is higher under the Scheduled Castes and Scheduled Tribes (Prevention of Atrocities) Act, 1989 (PoA Act).

In conclusion, tribes like Koraga face multiple forms of discrimination. There is a need for legislation that not only covers all such aspects but also supplements the existing laws. The Bill specifies these sites of discrimination and proposes measures to tackle them effectively.