Dalit Atrocities in the Name of ‘Honour’ 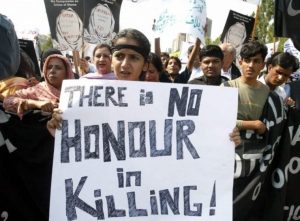 ‘The real remedy for breaking Caste is inter-marriage. Nothing else will serve as the solvent of Caste.’

Dr Ambedkar firmly believed that intermarriage is one of the ways to break caste hierarchies. But today’s reality and data show the other picture. In India where 1/6th of the population is Dalit, the atrocities against Dalit persons have been increased by 9.3% in the year 2020. ‘Honour crimes’ are one of the major atrocities faced by Dalits in our country. Generally, when people from oppressed castes marry or intend to marry someone from other castes, or vice-a-versa, it is seen as a so-called “dishonour” to families and leads to honour crimes. This burden of honour is often on the women. As the idea of purity and pollution is still very much prevalent in India, it has been assumed that the inter-caste marriages “impure” the purity of one’s race and caste.

Dalit atrocities in the name of honour are not just murder or extreme crimes, but also include many other offences such as verbal assault, physical harassment, kidnapping, public boycott etc. Often local caste organisations are commonly known as ‘khap panchayat/katta panchayat’ initiate such honour crimes by ordering the kidnapping of the couple, harassment of Dalit families and even murders in many instances. The aim of these khap panchayats is to keep intact the closed system of caste. Even in places where such caste or khap panchayats do not exist, honour crimes still take place. Honour crimes thus should be understood as a socio-political phenomenon which works through the power dynamics of the caste.

Although the Constitution of India promises the right to life and the right to equality, Dalit / Adivasi communities have always been deprived of it. As simple as it may seem, the right to love and the right to choose a partner when it comes to Dalits are rights which carry with them the risk of life itself. There are special laws to prevent atrocities and protect Dalits such as The Scheduled Saste and Scheduled tribe (prevention of atrocities) Act, 1989. Despite such special legislations, atrocities against Dalits continue unabated, thus showing the dark side of our democracy.

In India there is no specific legislation yet which addresses honour crimes. Hence, presently honour crimes would only be covered under the provisions under Indian Penal Code,1860, such as murder, threats to life, physical assault, grievous hurt, etc. There have been a few efforts to enact a special law on honour killing which has been suggested by various agencies. The Law Commission framed a draft law in the 242nd Law Commission Report, the National Commission on Women drafted the  Prevention of Crimes in the Name of Honour and Tradition Bill, 2010 and the Rajasthan government introduced the Rajasthan Prohibition of Interference  with the Freedom of Matrimonial Alliances  in the Name of Honour and Tradition Bill, 2019 but yet no special law has been introduced to address honour crimes specifically.

In this background, it is therefore expedient that that there is a need for a separate honour crimes legislation. As victims of honour crimes are mostly people from oppressed castes and communities, the legislation should include the protection of the dignity and life of persons affected by honour crimes, and should have provisions preventing physical and verbal harassment, violence and killing and social boycott in the name of violation of so-called honour of the family or communities. The law should also prohibit any action taken by khap panchayats and should impose positive duties on the state authorities for protection.

We have to ensure that in the 21st century, the ideal of Phule, Shahu, Ambedkar and Periyar are implemented through the course of law, which will protect the interests of the marginalised groups in our society.

This was written by Shravani, an intern at CLPR.