Constitution in the Classroom- Workshop at Amber Valley School 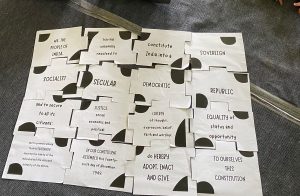 On 10th and 11th June 2022, the ConstitutionofIndia.net team conducted a series of workshops for grades 1-12 of the Amber Valley Residential School in Chikmagalur, Karnataka. The main aim of the workshops was to inculcate a basic understanding of the Constitution and its functions.

The workshop began with a jigsaw puzzle activity, where the students, arranged pieces of the jigsaw to reveal the wordings of the Preamble. CLPR’s resource person introduced the Preamble as the first page of the ‘Rule Book’ of the country, which is the Constitution. Important words and phrases such as ‘Sovereign’, ‘Democratic’, ‘Republic’ and ‘We the People of India’ were introduced and discussed by drawing parallels to real-world examples. This session concluded with a homework for students to create a Preamble for their respective classes.

The workshop began with the CLPR’s resource person asking why we need a Constitution. An analogy of a conflict in a game of football, where the referee interprets the rules of football to give instructions was given. This was correlated to the Constitution as a rulebook, interpreted by the Chief Justice of India, similar to a football referee. The CLPR video was played that showcased the formation of the Constitution.

After this, Fundamental Rights were introduced. A video of police persons dispersing peaceful protesters during the Indian freedom struggle was played to the students, and they were asked to identify which section of the Fundamental Right under Article 19 had been violated. A second video showcasing Gandhi’s trial for bail, where he was arrested for travelling within the country, was also shown to highlight the violation of the right to movement and to reside under Article 19. A third video displaying the Indian protestors during the freedom struggle was shown to describe the freedom to assemble peacefully and without arms. The students were able to correctly identify all the sub-rights under Article 19. CLPR’s resource person explained that these Fundamental Rights were inserted deliberately because the framers of the Constitution had experienced the deprivation of such rights during their struggles.

The session concluded with a fun activity where students were divided into groups and were asked to pick a sub-right under Article 19. They were asked to think, discuss and draw their ideas of what the world would look like if these rights that they picked did not exist today. The students came up with creative expressions of their notions on an India without these rights and freedoms.

The concept of Fundamental Rights was introduced. The students could more comfortably identify the sub-rights under Article 19 that were violated in the videos that were shown to them. After this, CLPR’s resource person, through the analogy of student-activist Disha Ravi from Bangalore, illustrated how the Constitution works towards protecting the Fundamental Rights of its citizens.

The students were first introduced to how the Constitution was drafted. The CLPR’s resource person articulated on how there existed Constitutions before 1946 such as the Government of India Act 1935.

The next segment of the workshop involved the students in a debate where they were asked to deliberate on arguments on whether free speech should be restricted. Students came up with interesting points such as limited restriction of Fundamental Rights based on rational principles. Some were against any restrictions to be imposed on such rights.

At the end of the discussion, it was pointed out that the nature of deliberations by the student groups were similar to those that happened within the Constituent Assembly. CLPR’s resource person elaborated on the similar discourse on Free Speech that happened during the Constituent Assembly debated on Draft Article 13 (Article 19). Arguments by members of the Assembly such as  Sir TT Krishnamachari, Sir Brajeshwar Prasad, Sardar Bhopinder Singh and Damodar Swarup Seth on free speech were briefly discussed. The attempt was made to show that the legitimacy of the Indian Constitution comes from the nature of deliberation that took place during the Constitution making process. This session was subsequently concluded.