Constitution in the Classroom: A Session with the Students of Aditi Mallya International School 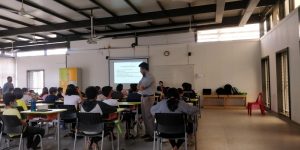 On March 8th 2022, the CLPR team conducted a ‘Constitution and Fundamental Rights’ workshop for the grade 6 students of Mallya Aditi International School. The key purpose of the visit was to instil a basic understanding of why the Constitution was made, and what it contains. In particular, the workshop focused on fundamental rights, and the protection of such rights.

Vineeth from the CLPR team began the workshop with an important question—Why do we need a Constitution? He began with an example of a conflict on a football field, drawing parallels between a football rule book and the Constitution as a ‘rule book’ for the country. He talked about how the Chief Justice of India was akin to a referee—both persons read and understood the ‘rule book’ and gave instructions on its implementation. 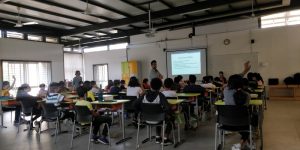 Then, the CLPR video showing the making of the constitution was played. The students appeared particularly interested in this, as the video took them through the freedom movement and key moments in the history of the Constitution. This portion of the workshop was aided with pictures of members of the Constituent Assembly. The students were asked to identify and name Assembly members which rapidly turned into an enjoyable game for the students. In honour of International Women’s Day, the women members of the Constituent Assembly were introduced.

The students very actively engaged in the next part of the workshop—the fundamental rights section. Beginning with an archival video of police persons dispersing peaceful protesters during the Indian freedom struggle. He explained that fundamental rights were inserted with care, because the framers of the Constitution had witnessed or experienced the deprivation of such rights in their struggles. After discussing the various clauses under Article 19, he quizzed the students about which clause would apply to the peaceful protestors in the video. This began a debate among the students on how the right to form associations, the right to freedom of speech and expression, and the right to assemble peacefully without arms, would interact. 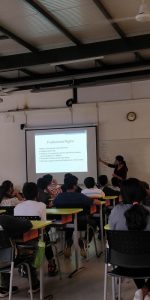 Vineeth then played a scene from the film, Gandhi, which depicted Gandhi’s refusal to accept restrictions on his travel and movement. The students then discussed which right would protect Gandhi in this instance, and talked about the right to move freely throughout the territory of India.

The workshop shifted to discussing how the rights were protected by the Court. The students were taken through the process of accessing legal remedy. This session inspired several questions. One student asked a question about who may appear in Court, and whether only lawyers may argue a case. Another student asked whether children may appear before the Court, and who would fight a case filed by a child. Gauri explained that if an individual believes that they are best suited to fight their case, the law allows them to appear before the Court. Vineeth cautioned the students that this must only be done when the individual is fully aware of the nuances of the case and the functioning of the Court, lest they insufficiently represent their cause. He advised that a lawyer—well versed in the subject and familiar with the formalities of the Court—would be best able to appear before a judge. Gauri then clarified that a child may not appear before a Court themselves, and must seek the help of an adult. The adult—a parent or trusted teacher—may fight the case on their behalf.

The session was engaging for the students, who actively participated and asked interesting questions. The approach of quizzes, videos, stories and some theory appeared effective with the students.