Bulldozing the Rule of Law: Khargone Demolitions and their Illegality 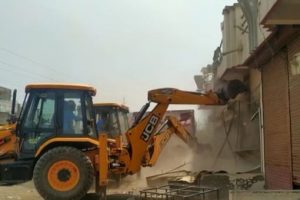 In April 2022, Ram Navami celebrations in Madhya Pradesh’s Khargone city resulted in communal violence involving incidents of stone-pelting and arson. In the aftermath, the District Administration undertook an unconstitutional and unlawful demolition drive, razing down  houses and establishments of the minority Muslim community. The District Collector has stated that the drive was undertaken to  “send rioters a message.” This pattern of “bulldozer politics” can be seen in other instances of the demolitions of Jahangirpuri and Khambat.

Violation of the Right to Housing under Article 21

The Delhi High Court in Sudama Singh v. Government of Delhi, held that prior to any eviction, the competent authority must identify persons who are eligible for purposes of rehabilitation. The Court further held that the rehabilitation must be carried out after meaningful consultation with affected persons. This has been affirmed by the Supreme Court.

However, in the Khargone demolitions, several affected persons claim that they were not served notice with enough time to respond, or that they were not served notice at all. In several cases, even legal buildings were demolished. No efforts have been made to meaningfully engage with and rehabilitate the residents whose houses were demolished. Therefore, the procedural safeguards in accordance with the precedent set above were not adhered to, and hence the right to life of the persons affected was violated.

Violation of Principles of Natural Justice

The demolitions were carried out under Section 248 of the Madhya Pradesh Land Revenue Code which empowers the Tehsildar to “summarily eject” persons who have taken unauthorised possession of government land and remove such constructions. However, the Madhya Pradesh High Court in Arun Bharti vs The State Of Madhya Pradesh, held that reasonable opportunity of hearing the persons affected is inherent in Section 248 of the Code. The Court reaffirmed this in Turabali & others Vs. State of M.P. & Anr and held that encroachers are also entitled to proper notice, reasonable time to file a reply, and the opportunity to be heard. Other State laws such as the Madhya Pradesh Municipal Corporation Act, 1956, also have requirements for the issuance of proper notices, the chance to reply, and the right to approach the Court. However, no such opportunity was given to the residents of Khargone.

The Demolitions violate the principles of necessity and proportionality

Demolition of property is usually the last resort in any case. In the present circumstances, the alleged rioters at the most could’ve been charged with Section 146 (rioting) and Section 153-A (promoting enmity between groups) of the Indian Penal Code. Civil claims could’ve been pursued for damage to public and private properties. Hence, the summary demolitions of houses of the alleged rioters were disproportionate to the legitimate aim of maintaining public law and order. The authorities went beyond what was strictly and reasonably required to achieve this aim.

The demolitions have also legitimized guilt by association wherein a whole building was demolished even if one tenant had allegedly engaged in rioting. The Delhi High Court in the case of Chandni Chowk Sarv Vyapar Mandal (Regd.) v. Municipal Corporation of Delhi, held that “it is not enough to take action against a class of persons, with the allegation that all of them are guilty, and tainted. Even if mass action is required, principles of fairness demand that the authority applies its mind to the materials regarding individual cases.”  Therefore, the means used to achieve the objects have had a disproportional effect on the residents of Khargone, and the bulldozing of homes and establishments without due process of law was illegal and unconstitutional.

Currently, members affected by the demolitions have approached the Madhya Pradesh High Court with a Petition seeking compensation for the loss that they and suffered.