Bail Decisions – Should Indian law recognise the distinction between Pre-Trial and Under-Trial Detention?

In the previous post, we briefly looked at the possible outcomes of a ‘first production’ at the pre-trial stage and the factors that are relevant to a bail decision. A legal assessment on whether bail to grant or refuse bail can take place at multiple points in the criminal process, including at first production. This begs the question – does the stage at which a bail decision is made, matter? 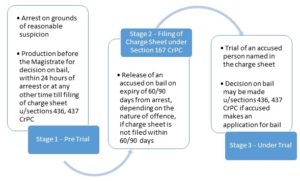 In the pre-trial stage, arrests take place on the basis of a a reasonable suspicion that they have committed an offence. At this stage, bail may be granted under Sections 436 and 437 CrPC, on weighing different factors. Once the police file a charge sheet naming a person as an ‘accused’, the ‘trial’ officially commences – this is the under-trial stage. Curiously, Sections 436 and 437 also govern bail decisions at the under-trial stage.

Bail decisions are primarily guided by the need to securing the presence of an arrested person in court and reducing the risk of offences being committed during the period of release.

However, at the pre-trial stage, law enforcement agencies operate merely on a suspicion without having brought a ‘charge’. Hence, detention at such an early stage should not be treated similar to detention after a charge sheet is filed. This failure to make a distinction between the under-trial and pre-trial stages affects the nature of legal and policy response to the ballooning prison population in India.

The United Kingdom (UK) does not formally distinguish between the pre-trial and under-trial stages with respect to bail decision making. The framework of the European Union’s Strasbourg Convention guides the law on bail in the UK: (i) presumption of liberty and innocence, (ii) individual assessment of every case and (iii) imposing the least restrictive regime pending trial.

In the United States, the Bail Reform Act, 1984 lays down factors that will guide bail decision making pending trial such as securing the presence of the arrested person in court and the risk of offences being committed during the period of release. Only recently have States like New Jersey implemented risk evaluating tools to assist in bail decision making at the pre-trial stage.

In India, substantive law makes no distinction between the pre-trial and under-trial stages. The National Crime Records Bureau (NCRB), which collects data on Crime in India and publishes the Prison Statistics, also does not distinguish between pre-trial and under-trial stages while analysing prisoner detention. It combines the two categories and defines ‘under-trial’ prisoners as persons committed to judicial custody pending investigation or trial.

The difference between pre-trial and under-trial stages, and bail decisions at each stage ought to be recognised and separately studied. This will help tailor laws and substantive legal provisions on bail decision making at each stage under the CrPC . Early release at the pre-trial will help address the adverse physical, psychological and economic impacts that long periods of incarceration have on prisoners.