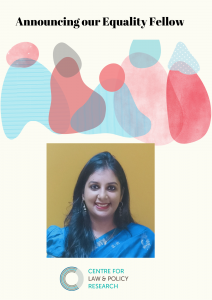 We are excited to announce the joining of a new Equality Fellow: Thulasi K Raj

She will engage in litigation and advocacy in the State of Kerala to work with communities facing discrimination based on caste, gender, sexuality, gender identity, and minority status.

Thulasi is a lawyer practicing at the High Court of Kerala and the Supreme Court of India and works on civil and constitutional law.  She completed her Masters in Law from University College London.  She was also an Indian Equality Law Fellow at Melbourne Law School.   She is also offered a visiting fellowship at the Institute on Law and Philosophy at Rutgers University, New Brunswick for September 2020.

She appeared for the petitioner (along with Adv. Kaleeswaram Raj) in Joseph Shine v. Union of India (2018)  before the Supreme Court in which the court held criminalizing adultery to be unconstitutional. Her research interests are constitutional law and theory, anti-discrimination law, law and religion, and comparative human rights. She frequently writes newspaper articles on relevant socio-legal issues.