A Woman’s Right to Shared Household under the Protection of Women from Domestic Violence Act, 2005 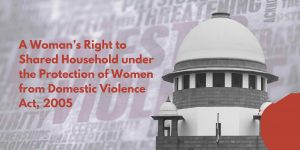 This blog throws light on how the Supreme Court of India has gradually expanded the concept of ‘right to shared household’ under the Protection of Women from Domestic Violence Act 2005 (the DV Act) to include widowed daughters-in-law through purposive interpretation of the DV Act.

Previous Judgments on the Right to Shared Household

While interpreting the right of an aggrieved person to reside in a shared household under section 17 of the DV Act, a Division Bench of the Supreme Court in  SK Batra v. Smt. Taruna Batra [(2007) 3 SCC 169] held that a wife has no right to reside in the residence that her in-laws own and in which the husband has no interest. This narrow interpretation of this concept restricted the right of the wronged daughters-in-law to claim the right to reside at her in-laws’ property.

A full bench of the Supreme Court in the case of Satish Ahuja v. Sneha Ahuja [(2021) 1 SCC 414], overruled S.K Batra after fourteen years in 2020. The court held that the daughter-in-law can exercise her right to live in the shared household, which is completely owned by the in-laws until her husband finds alternate accommodation. In this case, the court interpreted “shared household” in Section 17 irrespective of whether she has any legal interest or not.

Recently in the case of  Prabha Tyagi v. Kamlesh Devi, Criminal Appeal No. 511 of 2022 (Division Bench), the aggrieved person was widowed immediately after her marriage and was subjected to domestic violence and was forced to leave the matrimonial home, even though she was entitled to properties owned by her husband after his death. The issues before the court were as follows:

The court held that a victim of domestic violence can enforce her right to reside in a shared household, regardless of whether she lived in the shared household. The court introduced the concepts of “constructive residency” and “non-existence of marital connection” to conclude that the wife is entitled to relief under the DV Act.  The Bench observed that if a person is related to another person through consanguinity, marriage, or another type of relationship, it is not necessary for that person to physically live with the other person at the time of the alleged act of domestic violence.

For the first time, the court talks about instances like widows, women after judicial separation, divorced women, and those without any subsisting marital connection that they are entitled to rights and reliefs under the DV Act, and offers protection to all women irrespective of their status or marital relationship.

This article was authored by Dishari Chakrabarti, an MA student from Azim Premji University who interned with CLPR.