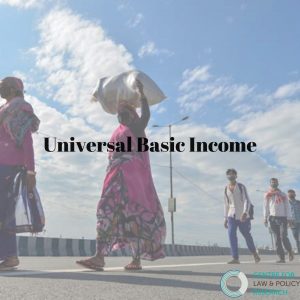 Amid this pandemic crisis and subsequent lockdown, we witnessed images of millions of migrants returning their homes walking hundreds of kilometres. As per data collected by Union Skill Development Ministry, around 67 lakh migrant workers returned to their homes. The predicament of these migrant workers during the crisis could have been significantly averted if they had a financial safety net to rely on – most had lost their jobs after the lock down had come into effect.

The migrant crisis makes the case for Universal Basic Income (UBI) strikingly relevant. UBI is based on the premise that a just society needs to guarantee to each basic income to access essential public goods and lead a life of dignity irrespective of trends in labor and economic markets.

Pilot studies conducted in Madhya Pradesh and other States between June 2011 to November 2012, found that small income support led to reduced indebtedness of the households, shift from casual work to self-employment and more. The results of these studies have been published in the book titled, Basic Income: A Transformative Policy for India.

UBI finds mention and support in the  Economic Survey 2016-17. The Survey dedicated a full chapter on UBI and discussed various modalities to implement it. The Survey argues that UBI will promote liberty, provide flexibility in the labor markets, efficiency in government schemes, the productivity of labor, and most importantly equality in true sense. While the Survey does note that there are potential externalities to UBI like conspicuous spending, overall UBI is still critical and important to the welfare of Indian citizens. It also warns that UBI must not be seen as a replacement to other central schemes and argues that the central government will have the fiscal capacity to sustain its current existing economic programs along with UBI, side by side.

Article 41 of the Indian Constitution says that ’the State shall, within the limits of its economic capacity and development, make effective provision for securing the right to work, to education and public assistance in cases of unemployment, old age, sickness and disablement, and in other cases of undeserved want.’

A well conceptualized and implemented UBI scheme in India can further the socio-economic transformation goals of Article 41 and other provisions of the Indian Constitution.

This blog has been authored by Ritambhara Singh.