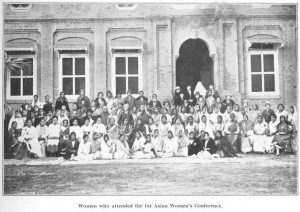 In Part I, we looked at the Women’s Indian Association’s (WIA) involvement in constitutional negotiations with the British in the late 1910s. The WIA vociferously demanded equal voting rights for women – but the British did not budge.  During this time, Indian leaders were also demanding measures for greater levels of self-government. These too, the British dismissed. Indian legislators across the country were becoming restless.

The Bill was comprehensive and represented the constitutional visions of Annie Besant and other Indian leaders. It contained a Bill of rights that included rights to freedom of expression, non-discrimination and more. Importantly, it contained a fundamental right that aimed at sex discrimination: (g) There shall be no disqualification or disability based on sex.

Besant planned to get the Bill passed by British Parliament through a senior Labour Party leader Mr. George Lansbury. However, the Labour Party lost the elections – the Bill was stalled and not passed. Besant’s plan did not work out. However, the Bill would play an immensely influential role in Indian constitutional thought. As Niraja Jayal in Citizenship and its Discontents reminds us, provisions of the Bill were verbatim repeated in the Nehru Report 1928 and together, these influenced the final Constitution of India 1950.

A few years after the Bill was drafted, in the late 1920s and early 1930s, there was churn in the constitutional and political negotiations between Indians and the British. The British, who had until now remained cold to Indian constitutional demands, began to take steps in framing a new constitutional framework for India – what would later become the Government of India Act 1935.

The WIA took part in these negotiations actively – it sent representatives to the round table conferences and the Lothian Committee on Franchise. It was during this time, that the WIA began to make demands that were explicitly linked to the constitutional future of India. These were often made in its in-house publication Stri-Dharma – which the WIA began publishing since 1918. Stri-Dharma aimed to become the voice of the Indian women’s movement.

In a 1931 issue, Stri-Dharma published an article titled ‘Women’s Place in the Future Constitution of India’ in which it mentioned some goals and principles of a future constitution:

Equal voting rights, reservations in legislatures, the de-linking of women’s franchise from their marital status and a non-discrimination clause. For the time, these were quite a remarkable and bold articulations of constitutional arrangements that were intended to protect and promote the rights of Indian women.